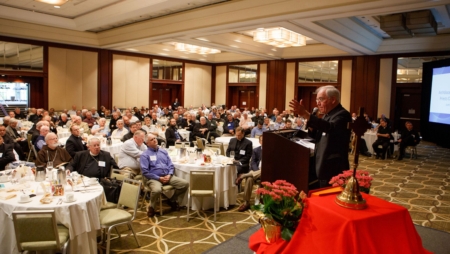 WALTHAM -- More than 250 priests of the Archdiocese of Boston discussed the role of pastoral planning in the New Evangelization at the 2012 Annual Priest Convocation held at the Waltham Westin Hotel June 7.

Speakers focused talks and discussions on the need for change as the archdiocese and the Church move forward in ministry.

The former Bishop of Portland, Maine, Bishop Richard J. Malone welcomed the opportunity to open the convocation for the Boston presbyterate before he heads to his new assignment as Bishop of Buffalo. The Salem native served alongside many of the men at the convocation, as a priest for 28 years and as an auxiliary bishop of Boston for four years.

Under Bishop Malone's leadership, the Portland Diocese undertook a restructuring strategy to preserve its ministries. He stressed the need for positive, flexible and hopeful attitudes amongst priests as Boston moves to address its own pastoral needs.

"I do want to affirm how crucial your role is. Nothing good will come of this project without the highest quality of pastoral leadership offered by each one of you," he told the priests.

Bishop Malone spoke about how the thrust for evangelization must direct pastoral planning.

"It is so important to have the lamp of the New Evangelization shining brightly on all the aspects of this pastoral planning process," he said.

"May your work together going forward, guided by the Holy Spirit, be for you and all you serve even with the challenges and all of that what John Paul II, in 'Novo Millennio Ineunte,' called an exciting work of pastoral revitalization. Think of that, pastoral revitalization, our work involving all of us," the bishop said.

"What he had to say, and bring to us today, very much connects with what we are doing here. Again, it is important for us to begin remembering that this is all at the service of evangelization," he said.

Msgr. Fay addressed the response to the pastoral planning proposal first outlined at a December 2011 meeting with the Boston presbyterate.

He focused on APPC consultations held from December 2011 through March 2012 throughout the archdiocese for priests, church staff and volunteers.

He reminded the priests of the APPC plan to strengthen parishes, presented findings from consultations run by the commission throughout the archdiocese in recent months, and discussed points the plan would continue addressing in the future.

He recapped the five mission initiatives proposed in the document "Disciples in Mission" published in 2011 that he said continue to guide the APPC.

The document proposed that any pastoral planning for the archdiocese aims to welcome Catholics to a deeper conversion to Christ, strengthen parishes, grow the Church through evangelization, strengthen and bring to excellence faith formation for Catholics of all ages, and reenergize pastoral leadership.

"We moved immediately as a commission to the issue of the strengthening of the parishes, and we did that because it was obvious to us that this became the foundation for all the other initiatives. If you are going to welcome people back to the life of the Church and ask them to commit themselves more fully to conversion, the place to which they are going to be welcomed is the parish," Msgr. Fay said.

Under the proposed plan, the archdiocese's 288 parishes would be paired into 127 groups, most consisting of two or three parishes, which would be served by a Pastoral Service Team or PST, led by the pastor and "consisting of priests, deacons, lay ecclesial ministers, finance councils and parish councils that serve multiple parishes," according to the APPC.

He said the APPC moved forward in suggesting grouping parishes with four things in mind: He said the plan would have to explore logical reasons beyond proximity to one another for suggesting collaboration between parishes, establish implementation through a reasonable timeline, ensure adequate numbers of pastoral staff to effectively support pastors, and facilitate training to promote effective evangelization.

"We took the 288 parishes and we proposed that there be 127 of these so-called pastoral collaboratives," he said.

He also said the APPC is working with some parishes and pastors on suggestions regarding which churches would work best together in collaborating groups. He said the final list of proposed "collaboratives" has not yet been finalized or submitted to the cardinal.

Next, he detailed nine key findings of the commission over the course of six months of consultations, which he said involved 5,000 people and generated 8,000 pages of feedback for the commission. The results of the consultation are available at www.planning2012.com.

-- He said the commission found that they had broad based support for the idea of moving toward the multiple parish collaboration.

"When we asked people if this was right, or near to right direction, 66 percent indicated to us, 'Yes, we think so,'" he said.

He also said 84 percent of respondents were against closing parishes as a way to move forward.

"So, what are we hearing?" he said in a report published on the archdiocese's pastoral planning website, "What we are doing now is not okay. Closing parishes is not okay. The pastoral team model for a slow and organic move to multiple parish pastoring is okay, although it continues to need refinement."

-- The commission found broad support for Cardinal Seán P. O'Malley's continued focus on evangelization as a long-term goal for the archdiocese.

However, he also said, "we learned that people do not see clearly the connection between the pastoral team model and the improvement of evangelization."

"This is a serious concern for us. Without evangelization, this is just restructuring. So, what's the connection? An early answer to that question might be that the parish is the heart of evangelization. The very act of forming a team, training a team, writing a local pastoral plan, and implementing that plan, will in itself help to orient the parishes to evangelization," he said in the report.

-- The commission found respondents eager to keep their pastors at their parishes.

Originally, the commission proposed that no pastors would remain as pastor at their current parish, but Msgr. Fay said the commission refocused on the idea that "the right man needs to be appointed as pastor in the situation."

--The consultations demonstrated that the implementation of the finalized plan must be gradual.

"Sixty eight percent of folks who gave us feedback said, please do this gradually -- and not rushed -- deliberately and organically. In other words, let it be the kind of thing that starts small and builds. Learn from the best practices as you are moving forward. We heard that, and we heard it very, very strongly," he said.

He said the commission was considering gradual implementation over five years, implementing the process in smaller steps rather than in large groups, such as in whole regions at a time.

-- The commission learned that parishes have their own individual cultures, and each had to be respected in the plan.

"It is clear that pastors will need to be appointed who can be respectful of the various cultures, within reason, that are being expressed in our various parishes, but this is not all that different from what we are already facing," said Msgr. Fay in the report.

-- The commission learned that there can be no "one size fits all" approach and many of the details of collaboration between parishes have to be worked out with that in mind.

"The principle of subsidiarity will be strongly respected in this implementation. Pastors, teams, and councils will be encouraged to think about the particular needs of their collaborative, and to find the best way forward for evangelization there," the report said.

-- The commission found that "training is absolutely pivotal" according to 82 percent of respondents.

-- The commission found a need to address concerns about how parish pastoral councils and parish finance councils will function within each collaborative. Msgr. Fay said approaches are being considered that enable this but would not be overly burdensome to pastors. He said they are reviewing best practices in cases where the Church faces similar situations elsewhere to develop and propose guidelines.

-- The commission also found great concern amongst respondents whether the reorganization would really work financially. Members of the commission with expertise in finance assured him that it would in most cases.

Msgr. Fay said the commission is still investigating the best way to incorporate parishes served by religious, collaboratives with multiple language groups or with multiple schools into the plan.

He said the presentation of the findings to the priests officially marked the end of the consultation period. He said the commission hopes to make its final recommendations to the cardinal by the early fall.

Msgr. Fay then led discussion and interactive electronic polling amongst the priests.

The cardinal closed the day-long convocation by thanking the priests for their presence.

"The revitalization of our parishes in great part depends on our own priestly behavior, our own personal conversion, commitment to the interior life, and the joy and love that we experience in ministry," he said.