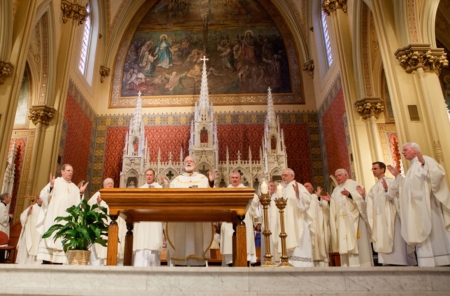 Cardinal Seán P. O'Malley celebrates the Mass of Thanksgiving for all involved in child protection and safe environment efforts in the Archdiocese of Boston June 10 at Our Lady Help of Christians Church in Newton. The Mass marked the 10th anniversary of the USCCB Charter for the Protection of Children and Young People and was an opportunity to thank all who have helped the Archdiocese in the implementation of the Charter as volunteers and as staff. Pilot photo/Gregory L. Tracy

NEWTON -- Cardinal Seán P. O'Malley was joined by parish child protection volunteers and others committed to child safety at a Mass to commemorate the 10th anniversary of the Charter for the Protection of Children and Young People June 10 at Our Lady Help of Christians Church.

"This Eucharist today is offered in a very special way for our diocese, for all of those who have been harmed by sexual abuse, and for all of the generous and dedicated volunteers whose countless hours of work have helped to make our churches safe places for children," the cardinal said in his homily.

Established at a meeting of bishops in Dallas in June 2002 as a national response to the clergy abuse scandal, the charter provides direction nationally from the USCCB used to protect children and young people on a local level. In the charter, the United States Conference of Catholic Bishops provided procedures and guidelines for reconciliation, for healing, for accountability, for prevention of future acts of abuse, and for addressing allegations of sexual abuse of minors.

It directs actions for Catholic institutions to work in: create safe environments for children and young people, address healing and reconciliation of victims and survivors, make prompt and effective responses to allegations, cooperate with civil authorities, and contribute to the disciplining of offenders.

The charter guides Catholic institutions in providing accountability for the future to ensure continued effective action against the problem, unified through a national Secretariat of Child and Youth Protection and a National Review Board.

"The Catholic Church, the Catholic people are committed to making our parishes, schools, and agencies as safe as possible for our children," Cardinal O'Malley said.

The USCCB created the guidelines 18 months after the clergy abuse crisis broke in Boston. Victims all over the country came forward at the time with more allegations, as the issue gained national momentum.

The bishops adopted the charter, approved a set of norms to enforce implementation in all dioceses, and established national offices to monitor compliance and recommend further actions.

"We have invested huge amounts of time and resources into child protection programs. We have tried to reach out to those who have been harmed by the sexual abuse of minors in our Church," the cardinal said.

The Mass brought together workers involved in the protection of children and young people throughout the archdiocese.

"The most important aspects of our child protection program are the screening and education, made possible because of the thousands of volunteers in our parishes and schools that tirelessly work on behalf of child safety," the cardinal said.

The cardinal pointed to a need for vigilance in defending children and young people in the Church and throughout society.

"It is a terrible problem in our society. The tragic history of our archdiocese has galvanized the Catholic community to do more, and it is paying off. Our parishes are safer places for children. We are scrupulous in reporting all accusations, and conduct an annual outside audit to assess how we are following the diocesan and national policies around child protection," he said.

Following the homily, Cardinal O'Malley led the assembly in reciting a "Prayer of Thanksgiving" for all those involved in child protection efforts.

"Dear Lord, we pray that all children will be held safe in your love and protection," the cardinal prayed.

"Grant us the wisdom and strength to fulfill our responsibility to always shield them from harm, and to continue to grace us with caring advocates in all of our parishes, schools and agencies who implement our child safety programs," he continued.

The former president of Regis College and child psychologist Mary Jane England, who served in 2002 as a member of the Archdiocese of Boston's Blue-Ribbon Commission for the Protection of Children, was among those who attended the Mass.

"The cardinal made a clear promise to continue this work," she said.

The task force England worked on implemented some of the archdiocese's responses to the crisis, including training for Catholic school and religious education students to recognize signs of sexual abuse.

"This problem is not going to go away," she said.

"All children should be trained in recognizing it and knowing they can go for help," she added.

England also pointed to the need for continued initiatives against sexual abuse of children in the Church and in society.

"We cannot stop. It is not just 10 years and then we will stop. We must continue this work, and if we can get more people in the community involved, like the public schools, all the better for us to actually prevent any further child sexual abuse," she said.

She said she was pleased to see the participation in the Mass by people committed to protecting the children and young people of the archdiocese.

"We came together as a community, very involved and very committed to eliminating child sexual abuse," she said.

[Editor's note: A video of Cardinal O'Malley's homily at the Mass can be viewed at BostonCatholicVideos.com]