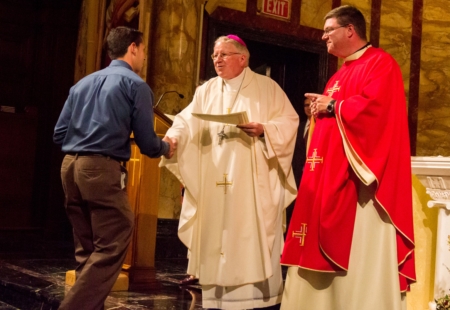 BRIGHTON -- The Theological Institute for the New Evangelization at Saint John's Seminary held a commencement Mass on June 1 for 115 students, their largest class since the certificates programs began in 2009, and graduated the first group to receive an advanced certificate in apologetics.

President of TINE, and vice-rector of the seminary, Father Christopher O'Connor celebrated the Mass before the presentation of certificates.

"They and the Boston Police are the only ones that are up at 2:30 in the morning, and I know this because they are sending me emails," Father O'Connor told the gathering at the commencement.

Under the direction of the rector of St. John's Seminary Bishop Arthur L. Kennedy, David Franks, who is vice president for mission, and his wife, Angela Franks, who is the director of theology programs, created the program in 2009. Both have doctorates in theology.

"Bishop Kennedy commissioned us to think about how the seminary could build on the work of the Master of Arts in Ministry Program to reach even more people. He lead us and he inspired us to do this certificate program based on the catechism of the Catholic Church," David Franks said.

Franks said Cardinal Seán P. O'Malley's appointment of Bishop Kennedy as the episcopal vicar for the New Evangelization is a testament to his vision for the educational value of the program.

"He has a profound sense of what the Church needs in order to appropriate the faith to be drawn into the living heart of Jesus Christ," he continued.

The certificate programs offer foundational and advanced tiers of education for students.

"They both share being based on the Catechism of the Catholic Church but then have slightly different sets of readings, either emphasizing the practical skills that a catechist needs or the broader cultural range that we have built into the Catholic Certificate," he said.

Classes for the foundational programs meet on Saturdays over a nine-week period.

Archdiocesan Secretary for Faith Formation and Evangelization Janet Benestad, who runs an off-site satellite of the courses, said the program is recognized by the Office of Religious Education of the archdiocese and counts toward archdiocesan certification to teach the faith.

"Grounded entirely in Scripture and the Catechism of the Catholic Church, the program enhances the understanding of fundamental teaching about the Creed, sacraments, morality and prayer, teaches the best methodologies for the new evangelization, and offers the opportunity for renewed prayer and spiritual life," she said.

Students can now follow up their foundational work with the advanced certificate, called the New Evangelization Certificate, which takes place over the course of an entire semester.

The New Evangelization Certificate acquaints students with apologetics so they can evangelize more effectively in their lives.

The graduating class in 2012 received the first advanced certificates offered since the program began.

"Apologetics is the art of communicating the credibility of the Catholic faith. It therefore leans heavily on natural reason, so we spend a lot of time working through philosophical precision, that is working with philosophical forms of thought that make it possible to make a convincing argument to those who do not share the faith," Franks said.

David Franks said he wanted students working toward the certificate to become versed in issues currently facing the Church.

"We also dealt with hot-button issues such as moral issues, contraception, same-sex marriage, and how to talk about that in the public square -- or to other Catholics who do not yet see the intelligibility of the Catholic teaching on these things," he said.

He said the program holds great significance in the context of the New Evangelization.

"Reinforced by Bishop Kennedy's emphasis is that cultural formation is absolutely essential for the New Evangelization," David Franks said.

Angela Franks described the coursework of the certificate programs.

"The certificates are designed to provide an affordable yet intensive experience of the fullness of the faith. They cover the entire catechism and provide this essential foundation for further growth in the faith," she said.

Angela Franks said the focus on the catechism is critical to the program.

"We focused the certificate classes on the catechism because it provides this beautiful exposition of the fullness of the faith," she continued.

She said the catechism provides definitive source for learning the teachings of the Church.

"What we find is that a lot of students have been relying on other people telling them what the Church teaches, which is fine, but when you access the catechism you really have it from the horse's mouth. You have the explanation of the Catholic faith from the Catholic Church itself. Our students, after they go through the course, feel very empowered," she said.

Kelley McLaughlin, who received her certificate that night, said she plans to use her knowledge to combine Montessori educational philosophies with catechesis for children from ages 3-6.

She said she also plans to share how convenient the program is with her fellow parishioners at St. Bridget Parish in Maynard.

"Even as a busy mother, it is very manageable. I was able to complete the course with my young children, running a homeschool, and working part time," she said.

Michael Sechrist said he plans to use his certificate to speak about his faith with his family.

"It has made me much more of an apologist and a real defender of the faith, so I am really excited to have the certificate," he said.

Bishop Kennedy said he welcomed the seminary's role in educating laypersons through the certificate programs under the unity provided through TINE.

"It has become the seminary's kind of signature for helping in the education of the laity. That then creates a proper kind of collaboration between clergy and laity, in the fact that we are all doing a similar kind of mission," he said.