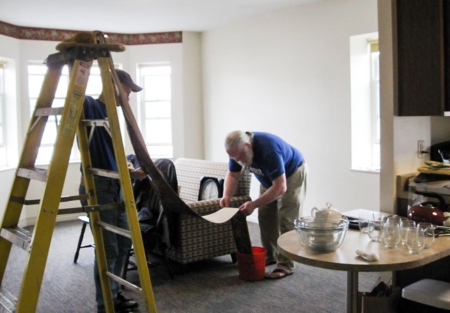 A group of retired employees from the State Street Corporation work with the Ignatian Volunteer Corps to furnish an apartment for homeless elderly May 22. Pilot photo/Courtesy Cristina Nelson

DORCHESTER -- There are many organizations that provide people with opportunities to use their lifetime of experience to give back to others, but the Ignatian Volunteer Corps provides something many others do not -- the opportunity for spiritual growth.

Jesuit Fathers Jim Conroy and Charles Costello created the IVC in 1995 to allow retired or mature men and women the chance to use their experience in ministry. The priests combined the principle of direct service to the poor with a process of faith-based reflection rooted in the Spiritual Exercises of St. Ignatius.

Before joining the IVC, Cristina Nelson used her doctorate in history to teach as an adjunct professor for more than 12 years. She said she began to feel "burnt out" with that line of work and took time off to make a transition away from the frontlines of education.

"I needed a break. The Ignatian Volunteer Corps was suggested to me as a way to do good work and also as a spiritual practice, which is important to me," she said.

Nelson interviewed with five different organizations before she found a place to serve with New England IVC.

She found a fit with a Boston organization called Hearth, which provides housing for the elderly homeless.

She said that created two-way sense of familiarity between her and the organization.

Nelson soon took up her work fundraising for Hearth's Adopt-a-Room campaign for their new Olmstead Green residence in Dorchester.

In her role with Hearth, Nelson coordinates with donors to furnish each of the rooms at the facility with furniture, decorations, and some basic necessities.

Nelson said the goal is to create individual living spaces that can become a home for residents.

When three weeks ago Nelson was showing potential donors from St. Ignatius of Loyola in Chestnut Hill the rooms, one of Hearth's clients joined the group.

"He had just signed his lease and wanted to take a look at the building," she said.

Nelson welcomed him to the tour, but while they were looking at one of the rooms furnished by the Hearth board of directors, the man began crying.

The man described a list of losses in his life that brought him to homelessness. An immigrant, with no job and no family, he had nowhere to go when his health failed him.

The sight of the furnishings and the care extended to him had moved him to tears.

"The last thing he said to me was 'God bless America,'" she said.

Nelson will complete her time with the IVC in June, but said the experience has enriched her life.

"I have enjoyed the Adopt-a-Room program immensely. I will be real sad to leave, to tell you the truth," she said.

Nelson plans to pursue an administrative position in higher education, as she returns to the working world.

The New England IVC helps the poor while providing a meaningful spiritual experience for volunteers, as part of its core mission.

"The mission is basically to get men and women with gifts, talents, skills and life experience to put those at the service of people who are materially poor or marginalized in society," regional director Dave Hinchen said.

Hinchen said the growth in Catholic values and reflection on their service are an important part of the volunteer experience.

"The needs of the poor bring them back to reflection on their own faith. They do that together in a community kind of way so that there is also a building of faith community going on at the same time," Hinchen said.

IVC collaborates with other organizations in pursuit of opportunities for retired and mature volunteers to serve, so the regional director works on a person-to-person basis to find the right fit for each volunteer.

Sometimes this means volunteers interview at multiple locations before starting their work. After making sure that the organizations they work with share the values of the IVC, Hinchen sets up meeting and interviews for the IVC volunteers with potential work sites.

"We do not just assign somebody to a place without them meeting one another ahead of time. They have to interview. The agency has to say, 'This person would be good here.' The person who is going to be the volunteer wants to make sure that this is someplace that she or he is going feel comfortable in and be able to give," Hinchen said.

Once the individual finds a site, they undertake their volunteer work in the spirit of IVC ministry.

The IVC ministry has its roots in the teachings of St. Ignatius of Loyola, a Spanish knight who underwent a conversion after being wounded in battle in 1521, swore off military life to devote his life to God, and started the Society of Jesus -- the Jesuits -- as approved by Pope Paul III in 1540.

The ten-month, two-day-a-week commitment includes keeping a journal and a regular schedule of spiritual reflection with a peer called a "reflector." The commitment also includes an overnight retreat, and monthly meetings with groups of volunteers.

Hinchen said with that level of commitment put forth by volunteers, the IVC makes an effort to make sure volunteers end up working in a place which nurtures the spirit of community, even allowing volunteers to suggest new places to place volunteers.

"For the most part, we have those lined up before the applicants come in, but we are always looking for new places to put volunteers," Hinchen said.

According to the organization's website, most IVC volunteers are over age 50. The New England branch is in its third year, and has 15 volunteers currently serving.

Hinchen stressed the importance of the idea that service with the IVC requires serious commitment.

"Sometimes people call me up and they are hoping they can work an hour or two in their neighborhood or something, and with the Ignatian Volunteer Corps it is not that simple. It is a substantial commitment of time and self," he said.

More information on the program is available at www.ivcusa.org/ivc-offices/welcome-to-ivc-new-england.