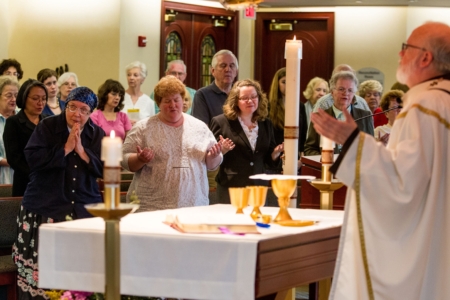 'Friday (5/25), at the Pastoral Center, we gathered at the daily noontime Mass with the consecrated virgins of the archdiocese, followed by a luncheon for them.' Pilot photo/CardinalSeansBlog.org

I want to begin this week by offering a word of congratulations to Bishop Richard Malone, who was of course formerly an auxiliary bishop of Boston and then Bishop of Portland, Maine. Just this week he was appointed by the Holy Father to be the bishop of Buffalo, New York, which is a very large diocese. We congratulate him and ensure him of our prayers and best wishes. We will also pray for the Diocese of Portland, which is now awaiting the appointment of their new bishop.

Last Thursday (5/24), I was pleased to attend the annual dinner sponsored by the Order of Malta for our retired priests at the Boston College Club. The club is located in Boston's financial district and has a spectacular view of the city and the harbor. There were about 100 people there for the dinner. As always, the evening was very entertaining. Music was provided by a corps of Irish bagpipers, as well as former state treasurer Bob Crane and his singing group, "The Treasury Notes." Dick Flavin delivered a couple of very funny monologues about baseball and politics. Father Richard Fitzgerald sang "Southie Is My Hometown" to the delight of the Boston priests. It was a beautiful evening and a great sign of the affection and gratitude that the Catholics of the archdiocese have for their retired priests who have served so mightily, and who continue to serve in many capacities.

Friday (5/25), at the Pastoral Center, we gathered at the daily noontime Mass with the consecrated virgins of the archdiocese, followed by a luncheon for them. Theirs is a very special presence in the Church, which dates back to the first generations of Christians. We currently have 13 consecrated virgins here in the archdiocese and I was very happy that a great many of them were able to join us for the Mass. These are women who have consecrated themselves to the Church and to a special life of prayer and service to God's people, even while many continue with their secular careers. It is one of the earliest forms of consecrated life in the Church. This vocation has been strongly encouraged by the Archbishops of Boston and I am proud to say that we are among the dioceses with the largest number of consecrated virgins in the country. We are very blessed to have their presence in the archdiocese.

Saturday morning (5/26), we had one of our regular meetings of the Massachusetts Catholic Conference, the organization that represents the bishops of Massachusetts on public policy matters. There are many issues of importance to the archdiocese that we are currently facing in the commonwealth and I can say it was a very fruitful and important meeting. It was also the last meeting for Fred Torphy, who has been part of the Mass. Catholic Conference for over 40 years. At the meeting, I thanked him for his over four decades of service. He began as counsel for the Diocese of Fall River during the time of Cardinal Medeiros and has served three bishops of the Diocese of Fall River. He has been very devoted to the Church and served the Church zealously in his profession.