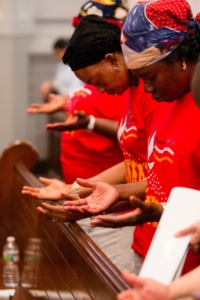 Members of the Charismatic Renewal movement pray during the Pentecost Vigil celebrated by Cardinal O'Malley at the Cathedral of the Holy Cross May 26. Pilot photo/ Gregory L. Tracy

SOUTH END -- In what looks to be the start of a new annual tradition, Cardinal Seán P. O'Malley brought together new movements, ecclesial realities, and ethnic communities of the Archdiocese of Boston to celebrate the Vigil of Pentecost on May 26.

The various groups joined together with guests at the vigil, sometimes called the "birthday of the Church," and celebrated a multi-lingual Mass and musical program at the Cathedral of the Holy Cross. Pentecost, which falls 50 days after Easter, celebrates the day when the Apostles received the Holy Spirit and began preaching the Gospel.

"It is only in the context of community that the gifts of the Spirit are bestowed, nurtured, and flourish," Cardinal O'Malley.

The readings and prayers of the Mass evoked the idea of people overcoming language and cultural barriers to worship as a single community with the help of the Holy Spirit.

The vigil readings were proclaimed in English, Portuguese and Spanish. The Gospel reading and general intercessions were each offered in seven different languages.

David Sulewski of the Community of Sant'Egidio proclaimed the first reading, Genesis 11:1-9, in English.

"That is why it was called Babel, because there the Lord confused the speech of all the world," Sulewski read.

In his homily, Cardinal O'Malley explained the significance of the coming of the Holy Spirit.

"The Pentecost story is the mirror image, the exact opposite of what happened at Babel. At Pentecost the Spirit hovered over a frightened group of fisherman and peasants, who were hiding, and lead them into the streets to announce the Gospel. That is the first part of the miracle, that Peter and the others who had fled and hid were now filled with that courage to go out and announce the Gospel to the world," the cardinal said in the homily.

"The second part of the miracle is that the thousands of strangers gathered from all over the world, speaking so many different languages, all heard the apostles preaching," he continued.

He said the Holy Spirit began the work of uniting the early Church through a common language of faith on that day, and the Church was born.

"There were no simultaneous-translation machines there. There was the Holy Spirit," he said.

The cardinal said groups, like those gathered for the vigil, played a key role in the development of his personal faith.

"In my own childhood and youth, I was so influenced by The Legion of Mary, The Cursillo, and the Third Order of St. Francis. Today, we have experienced a flourishing of so many new ecclesial communities that are the fruit of the Spirit among us. We must learn to encourage each other to work together to build up the body of Christ. These ecclesial communities provide a spiritual home for our people," he said.

He called upon the gathered to redouble their efforts for the New Evangelization during the upcoming Year of Faith.

"Happy birthday to all, now go and set the world on fire," Cardinal O'Malley said, ending his homily.

The cardinal thanked the director of the Office of Worship and Spiritual Life, Father Jonathan Gaspar for bringing the communities of faith together for the vigil, with his work of outreach in arranging the event.

The cardinal compared Father Gaspar's work organizing the vigil and bringing all the groups together, to a construction project.

"I think Father Jonathan Gaspar is the man, who had the plans and the lumber, who brought us together today, to conclude this wonderful Novena of Pentecost. We are very grateful to him," Cardinal O'Malley said.

After the Mass, Father Gaspar told The Pilot that 1,200 people turned out for the event, and he thanked those who helped him organize it and the communities who participated.

"Thank you for your help in promoting the Mass, and for your assistance in offering readers, musicians, and so many others who helped to make the liturgy so dignified and beautiful. I am so grateful for your enthusiastic support and encouragement," Father Gaspar said.

Father Gaspar gave credit to the evangelical power of groups like those at the vigil.

"Many men and women have been brought back to the faith through their involvement in these communities," Father Gaspar said.

Vitalis Osuji, 21, who studies pre-med at Northeastern University, said his experience with one of the movements in Boston kept his spiritual life rooted in the Catholic Church, giving him a spiritual home away from his home country.

He came to the United States from Nigeria in 2009 as an 18-year-old and wanted to keep the faith his mother raised him with alive. He found a place for that in Dorchester.

Regular group prayer and Mass with the Nigerian Catholic Community of St. Katharine Drexel Heritage gave him a familiar place to pray and grow spiritually, as he ventured into an unfamiliar culture and experience and began his studies preparing to one day become a doctor.

He said despite trying to keep up with his studies he attends the "Power of Prayer" group meetings when he can.

He said seeing many groups together to celebrate the Holy Sacrifice of the Mass in unity at the event inspired him.

"I am excited to be here, because for some reason whenever I go to events like this I just feel spiritually strengthened," he said.

"I consider that by far one of the best gifts ever," he said.

The head of the Charismatic Renewal in the Archdiocese of Boston Vincent Cerasuolo said he felt excited to see all the groups together at the vigil.

"I have to tell you that in the work I do, which is extraordinarily difficult, the great joy I have is to see all of the different communities together worshiping. It is like looking at a bouquet of flowers with different colors, and textures," he said.

"Each group brings its own unique beauty into the larger community of faith," Cerasuolo said.