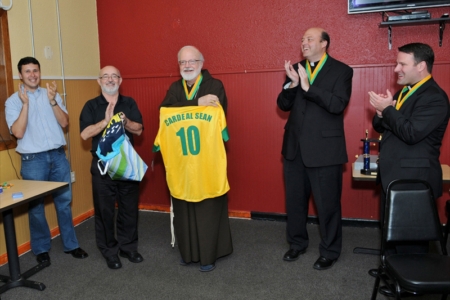 'The priests and lay leadership of the Brazilian Apostolate were present, along with the team, who presented me with a team jersey with the colors of the Brazilian flag as well as a medal.' Pilot photo/CardinalSeansBlog.org

This week (5/21) we were pleased to express our support for the 43 dioceses and Catholic institutions that filed suit in federal court to prevent the implementation of the federal mandate that would require most health plans offered by Catholic employers to cover drugs and procedures they find morally objectionable. The U.S. Conference of Catholic Bishops continues in its efforts to counteract the nefarious effects of the mandate, which is an intrusion into the practice of religion in our country. There is an ongoing dialogue with the White House (which has not been terribly fruitful) and there continue to be efforts in Congress, but it was thought that the courts must be also part of the strategy. So, a number of dioceses and institutions were identified in different areas of the country to join in a lawsuit. Those suits are going forward and we are also waiting to hear what the Supreme Court will decide in their review of the Affordable Care Act. In light of these events, we can see that the observance of the Fortnight for Freedom (a special period of prayer, study, catechesis and public action proclaimed by the U.S. bishops for June 21 to July 4) will serve as an important tool for Catholics to understand the issues that are at stake.

On Friday (5/18), I attended the graduation of Malden Catholic High School. It is a very large high school, and there must have been over 700 students in attendance. The school is another shining example of the ministry of the Xaverian Brothers. We had the baccalaureate Mass, at which they honored a number of fathers and sons and grandfathers, who were all graduates of Malden Catholic. It was a very moving testimony to the enduring legacy of the Catholic education imparted there. Then on Saturday (5/19) I went to St. Patrick's in Watertown to celebrate confirmations in the parish. The Watertown Belmont parishes came together for a joint confirmation there. On Sunday (5/20), we had the commencement of Boston College High School. I gave the commencement address in the gymnasium. It is the largest Catholic high school in the archdiocese and there were about 3,000 people in attendance. It was a beautiful celebration. On Monday (5/21) I attended the commencement of Boston College, where I delivered the benediction. The commencement speaker was journalist Bob Woodruff who gave a beautiful address, talking about his own life experience. He was seriously injured when a road-side bomb hit the military convoy he was riding in while he was covering the war in Iraq. He spoke about a near-death experience he had and how important faith is in people's lives. And he urged the young people to come to grips with these larger questions of life. He told them that one never realizes how important these issues are until one gets older and begins to face dramatic situations in life. He said faith can be a great source of strength through these moments. It was a truly personal experience and a great witness.

That evening (5/22) I went to Boston University to honor the 12 recipients of the university's Medeiros scholarships. The scholarship was established by former Boston University president John Silber to honor Cardinal Medeiros, and provides a full four-year scholarship to graduates of Catholic High schools in the archdiocese. In my remarks, I told the students and their families a little about who Cardinal Medeiros was, his experience as an immigrant, and how important an education was in his life. He had been a factory worker in Fall River and was going to drop out of school, but his teachers prevailed upon his parents to allow him to continue his studies. Of course, we know he went on to a brilliant academic career, eventually becoming Archbishop of Boston.

Each year, we have a Mass and a luncheon to which we invite the new superiors of women religious communities that have been elected during the last calendar year. This year, we celebrated the Mass this past Wednesday (5/23) in the Chapel here at the pastoral center. We are very pleased to have this opportunity to welcome them. We are as always grateful for the important work women religious do in our archdiocese and for the important role they play in the church.

That evening (5/23) I went to a dinner hosted by the Brazilian Apostolate. There had been a soccer tournament to which they had invited me but, unfortunately, I was unable to come. They had planned to honor me at the tournament, so instead dinner was held as a sort of "rematch." It was a wonderful evening held at a Brazilian restaurant in Marlborough. The priests and lay leadership of the Brazilian Apostolate were present, along with the team, who presented me with a team jersey with the colors of the Brazilian flag as well as a medal.