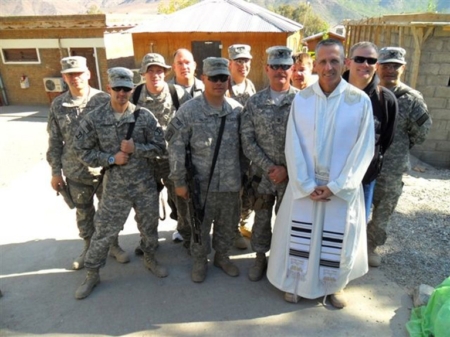 Twelve years of service as a Catholic chaplain in the Army have given me a deep respect for the men and women serving in the military. Though most soldiers deployed in combat zones are young (the majority under the age of 30), they are willing to lay down their lives for the sake of their friends and for their country.

On one of my recent combat deployments, I was celebrating Mass in as many locations as possible to bring the sacraments to troops. Due to rugged terrain, most movements were done by helicopter. Though helicopter travel is the safest means of transportation, it often means an extended stay at a base until an aircraft for transport becomes available, or until combat operations permit travel.

I'll never forget one such time when I was stranded for several days at a small and remote Forward Operating Base (FOB) awaiting Army helicopter transport. An unexpected convoy arrived at the FOB with a very special mission. The soldiers explained that they had come from an even smaller and more remote FOB. Due to the location and isolation of their base, no Catholic priest had ever been able to reach them. After learning that a Catholic priest was at a base nearby, these soldiers had risked their lives to bring me to their location to celebrate Mass.

Despite a perilous route filled with dangers from roadside bombs or attacks, the soldiers in the convoy decided it was worth the risk to organize a mission to find a priest. These young soldiers' hungry desire for God and Holy Communion was stronger than their fear of the dangers they faced. I was honored to travel with them, to celebrate the Eucharist, and to hear their confessions.

As I geared up for the return trip to my base, I was inundated with the most meaningful and heartfelt gestures of gratitude. These young men were so thankful to have the presence of the Blessed Sacrament in their midst and have the opportunity to attend Mass and have their confession heard by a priest. I never have encountered such profound and genuine thankfulness for the gift of the Eucharist--in combat zones or at home in the U.S. These experiences crystallize how important it is for our soldiers to have access to a priest and to the sacraments.

The ministry and presence of a chaplain can make all the difference for a soldier and help him or her find hope and comfort during difficult times--when a friend is wounded or killed, or when a soldier feels the loneliness that so often accompanies deployment. Away from home and loved ones for extended periods of time and living under the constant threat of attack and danger, soldiers look to a chaplain for normalcy and reminders of the love and comfort that family, friends, and faith provide.

Though I'm a Boston priest, my work in the military takes me outside the boundaries of the Archdiocese of Boston to deployed troops who need the same pastoral care that is so easy to take for granted living in safety. The chaplain's ministry helps carry out the universal mission of the Church to care for souls, and it is a ministry of which I am privileged and honored to be a part.

The most important thing you can do to help this ministry is to pray. First, pray for the brave men and women who go into harm's way in the name of freedom. Remember their families--spouses, children, parents, siblings, grandparents, aunts, and uncles--who also are making a sacrifice. Second, pray for an increase in vocations to the priesthood. We need more holy men to hear and answer the call to serve the Church as priests both domestically and abroad in the military. Finally, please pray for me, and for all priests serving in the military as chaplains. The Catholic faithful who offer their prayers renew and strengthen the work of all Catholic chaplains and this critical ministry of presence to our brothers and sisters in the military. May God continue to bless our faithful soldiers and give them the grace, hope, and strength they need to serve and protect our country and all of us.

Father Paul K. Hurley is lieutenant colonel of the 101st airborne division of the U.S. Army. His ministry is made possible in part, by the Archdiocese of Boston's office of clergy personnel and the vocations office, two of 50 central ministries supported by the Annual Catholic Appeal. To support the Catholic Appeal, please visit www.bostoncatholicappeal.org.