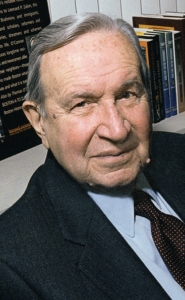 CHESTNUT HILL -- Thomas H. O'Connor, the university historian and long-popular professor emeritus of history at Boston College died at his Milton home on May 20 after suffering a heart attack. He was 89. O'Connor was widely considered "the dean of Boston's historians" for his authorship of such critically acclaimed books as "Boston Catholics," "Civil War Boston" and "The Boston Irish."

Dr. O'Connor, a South Boston native who took his high school diploma from Boston Latin School, served in the U.S. Army in India in World War II before returning to Boston to earn his bachelor and master's degrees at BC, and a doctorate in 1957 from Boston University.

Dr. O'Connor's distinguished teaching and writing career spanned more than half a century. He joined the Boston College faculty in 1950, after earning a BC undergraduate degree in 1949 and completing his master's degree in history the following year. From 1962 to 1970, he served as chairman of the History Department, where he attained the rank of full professor.

Best known as a chronicler of his beloved home city, O'Connor explored in-depth the richly layered history of Boston, bringing its diverse and fascinating heritage to a wide audience.

Among his dozens of volumes on his native city, Dr. O'Connor edited "Two Centuries of Faith: The Influence of Catholicism on Boston, 1808-2008" (2009), commissioned by Boston College as a gift from the University to the Archdiocese of Boston in recognition of its 200th anniversary, and presented at a campus reception by University President William P. Leahy, S.J., to Cardinal Seán P. O'Malley, O.F.M. Cap., archbishop of Boston. The volume of scholarly essays focuses on the various ways in which Catholicism has influenced life and society in the Greater Boston area.

Dr. O'Connor was a member of the Board of Trustees of the Bostonian Society, a resident fellow at the Massachusetts Historical Society and a member of the Massachusetts Archives Commission. In 1988, he was named by President Reagan to serve on the Commission on the Bicentennial of the United States Constitution, and in 1999, he received the Gold Medal of the Eire Society of Boston.

Dr. O'Connor is survived by his wife of 63 years, Mary; children, Jeanne O'Connor-Green of Milton and Michael of Newburyport and two grandsons. He was pre-deceased by his son Steven.

A funeral Mass for Dr. O'Connor was to be held at St. Thomas More Church in Braintree May 24. Burial was to be at St. Francis Xavier Cemetery, Weymouth.