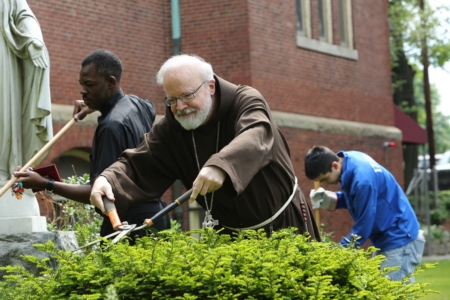 Each year, volunteers from the Pastoral Center designate a week to go and help out one of the inner city parishes. This year we were at St. Angela Merici Parish in Mattapan. Pilot photo/CardinalSeansBlog.org

...That evening (5/10), I visited St. Rose of Lima Parish in Chelsea for the graduation of the Instituto de Formacion de Laicos, the Spanish-language lay formation program of our Religious Education Office. We had a Mass, after which we distributed the diplomas. We had about 45 graduates of the program, which involves two years of formation. The graduates came from many different parishes in the archdiocese, and I was happy to see that many of their pastors came to support them. After the ceremony, there was a reception in the parish hall where they presented Pilar Latorre, the director of the program, with a plaque showing that some star in the universe has been named after her. I do not know if she is planning to travel there to claim the star, but for us she is a star because of the wonderful work she does with the Hispanic community!

Saturday (5/12) was the installation of Father Richard Erikson as pastor of Our Lady of Fatima in Sudbury. Father Erikson is a very talented priest who served so well in the military chaplaincy and here as Vicar General. This is the second important appointment given to him recently. Just a couple of weeks before, he had been recognized by the Air Force and promoted to the rank of Brigadier General. People gave him an enthusiastic welcome. His father and other members of his family were there for the ceremony, so it was nice to be able to recognize them, as well.

Each year, volunteers from the Pastoral Center designate a week to go and help out one of the inner city parishes. This year we were at St. Angela Merici Parish in Mattapan. On Monday (5/14), I joined the group of people who were there helping out with the landscaping around the church and school. I also had an opportunity to visit the children at the Pope John Paul II Catholic Academy campus there. Father Bill Joy is doing such wonderful work there, the school is such an important presence in the neighborhood. I have to say, the children were just adorable! In one of the younger classrooms, I believe it was pre-K, the children sang a song for us that named all 50 states. I told Father Joy, I don't know if I could name all 50 states!

That evening (5/14), we had the last meeting of the year of our Archdiocesan Pastoral Council. Of course, they have been involved in a number of the ongoing issues in the archdiocese, such as the fight against physician assisted suicide and the planning of a conference on the Church's teaching on social justice. At this meeting Janet Benestad gave them a very important presentation on our efforts to resist the legalization of physician assisted suicide here in Massachusetts. The dedication of the members of the APC is admirable. We are grateful for all they do and the excellent work that Sister Marian Batho does coordinating such a large group.

Finally, yesterday (5/17) I met with our directors of religious education, who were holding their gathering here at the Pastoral Center. Susan Kay and Susan Abbott of our Religious Education Office did a superb job coordinating the event. The meeting was an opportunity to talk about their important role in the parishes. We also spoke about the fact that the Year of Faith is part of the upcoming celebration of the anniversary of the publication of the Catechism of the Catholic Church. I expressed my hope that the Year of Faith will be a time for us to strengthen our catechetical programs and ensure that we are looking for new ways to incorporate young people into the life of the Church, particularly the worshiping community.