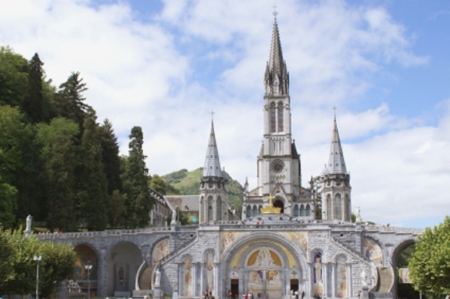 BRAINTREE -- Ten-year-old Luke Dillon was excited to visit Lourdes, France -- not as a tourist, but a pilgrim seeking healing.

The 950-year-old Order of Malta brought Dillon and 50 others with debilitating conditions or sicknesses to experience the healing waters in Lourdes, France, as part of their annual pilgrimage, May 2 through May 8. The 27th annual pilgrimage was run by 1,800 members of the American Association of the Order of Malta, the branch of the group in the United States.

Luke has muscular dystrophy that keeps him bound to a wheelchair, so he felt very excited for the trip according to his mother, Dawn Dillon.

Luke and his mother emphasized that the trip to Lourdes with the Order of Malta was "not a vacation."

The trip took Luke and his mother from Newark, N.J. to France, with no immediate rest upon arrival. The trip included visits to the Rosary Basilica, St. Pius X Basilica, and to the Grotto of Massabielle in the Sanctuary of Our Lady of Lourdes.

Luke said he especially enjoyed the visit to St. Pius X Basilica. He described how the location captured his 10-year-old imagination.

The group accompanied Luke and 50 "malades" (French for "the sick"). Each malade accompanied by a family member or caregiver joined about 100 health care workers and the Knights and Dames of the Order of Malta formed the Boston group of about 350 people.

The Grotto of Massabielle at Lourdes contains a spring of water believed to hold healing properties, which have contributed to 68 miracles recognized by the Church.

The shrine was erected on the spot where the Virgin Mary appeared to French peasant-girl Bernadette Soubirous multiple times in 1858, revealing the healing waters. Today, Lourdes draws six million pilgrims each year.

On this year's trip, Luke bathed in the waters and prayed, as caregivers helped him into the pool.

Though he did not experience a miraculous cure for his condition, Luke -- whose name means "bringer of the light" in the Christian tradition -- said he did experience a small miracle as he exited St. Pius X Basilica on a very rainy day.

"It was raining after we came out of St. Pius X Church and the sun came out," Luke told The Pilot.

Luke's mother Dawn Dillon noted the healing power of the trip for her and her husband Tim on an emotional level.

She said her in-laws Jim and Sue Dillon, a knight and a dame in the order, arranged the trip.

"I thought it was mostly for Luke, and then my mother-in-law pulled me aside after we had seen a few things. She said, 'I am so glad you are here because I really wanted you and Tim to be here for your own healing because you are suffering at the foot of the Cross.'" Sue said.

"It really shifts your perspective," she said.

The Order of Malta is a lay religious order of the Roman Catholic Church, founded during the crusades, making it the oldest order of knighthood in the world.

The Boston Area is one of 26 Areas of the Order of Malta, American Association U.S.A., with members from Massachusetts, New Hampshire, Vermont and Maine. The local contingent of about 240 knights and dames conducts charitable work locally under the guidance of a Boston area board.

Members, called knights and dames, dedicate themselves to help the sick and the poor and defend the faith as part of their duties to the order's concept of chivalry.

A dame of the order, Sheila Feitleberg, appeared on the Good Catholic Life with her husband, a knight and advisor to the Boston board, Joe Feitleberg.

After the radio show, Sheila explained how chivalry drives the commitments of knights and dames.

"I think the members of the order intend to live up to a noble intention. They extend themselves to a higher level. They want to take the higher bar. They want to be more of a gentleman and more of a lady to people in need," she said.

The Order of Malta started as a Hospitaller group, running hospitals for pilgrims in the holy land during the Crusades, providing medical service, irrespective of religion, to those in need.

The tradition continues with the trip to Lourdes and other works of the Order of Malta throughout the world.

The order has carried out humanitarian aid projects in Kosovo and Macedonia, India, Southeast Asia, Afghanistan, Pakistan, Mexico, Congo, Sudan, Myanmar, Sri Lanka and Georgia. Some of the projects continue today, with support from hospitals of the order like the Hopital Sacre Coeur in Haiti.

Nancy Gibson, a dame of the Order of Malta, was at home recovering from surgery and could not appear on the radio show, but she attended the pilgrimage as a group leader.

"Our Catholic faith is universal. It is in all languages, all around the world. We go to Lourdes and we do have hope. There are small miracles that happen every day there," she said.