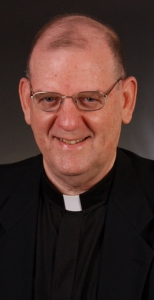 For the past two weeks Father Kevin Deeley, newly appointed pastor of St. Michael Parish in North Andover, has been familiarizing himself with his new parish -- and so far, he is very impressed.

"I feel so very blessed to be here," said Father Deeley. "This is an extraordinary parish, and the pastors who have come before me have done extraordinary work."

Born in Belmont in 1948, the youngest of five boys, Father Deeley is a son of Sacred Heart Parish in Watertown.

According to Father Deeley, by the time he was a high school student at Matignon High School in Cambridge, he knew God was calling him to the priesthood.

"The Sisters of St. Joseph were very instrumental in helping me to discover my vocation," he recalled.

Both he and his brother Robert, who is currently Vicar General and Moderator of the Curia for the archdiocese, heeded that call, and on May 18, 1974, Father Deeley was ordained to the priesthood at the Cathedral of the Holy Cross by Cardinal Humberto Medeiros.

He was first assigned to St. Peter Parish in Dorchester, where he served as a parochial vicar for five years before moving to St. Mary of the Assumption Parish in Brookline.

In 1983, he became chaplain for his alma mater, Matignon High School, where he remained for six years.

"Being a high school chaplain is a very exciting ministry," said Father Deeley.

In 1989, he became the associate director for the Clergy Personnel Office of the archdiocese, a position he held until 1995 when he decided to serve his country as a military chaplain for the U.S. Navy.

"[The chaplaincy] was very rewarding, in the sense that the Catholic priest is there for the sailors who are Catholic. It's like bringing the Church to them," explained Father Deeley.

"As a chaplain, we make their home parish visible to the sailors," he said, adding that in his 16 years in military service he has realized that "we are in good hands" with our service men and women.

In January 2012, Father Deeley returned to the archdiocese, where he spent three weeks as temporary parochial vicar at St. Pius Fifth Parish in Lynn before being appointed temporary administrator at St. Raphael Parish in Medford.

"This is a great parish, with great people that I look forward to getting to know," he said.