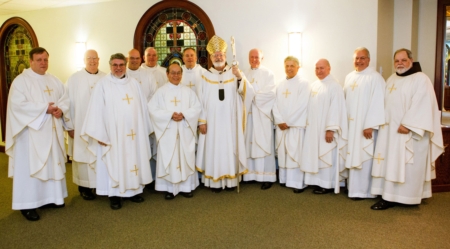 'On Wednesday (May 9), we had twelve priests celebrating their 25th Jubilee. They were here at the Pastoral Center for the noon Mass. Combined, their work provided 300 years of ministry to God's people. We thanked them for their generosity and urged everyone to pray for vocations.' Pilot photo/Gregory L. Tracy

Last Thursday (May 3), I celebrated a Mass for the Catholic School Foundation's second class of CSF Scholars. These are children who are receiving scholarships as they graduate from our Catholic primary schools, so that they can continue on to Catholic high schools. At the Mass they are given a pin to honor their achievement.

The Class of 2016 CSF Scholars met those who were inducted into the program at last year's event. After Mass, we had a reception in the gym of Cathedral High School, and of course their families were all very happy to be able to be a part of this wonderful program.

'The Suffering of the Innocents'

(Sunday), I headed over to Symphony Hall for Kiko Arguello's "The Suffering of The Innocents," conducted by Pau Jorquera.

To me, the most moving moment came when Kiko spoke about the suffering of the Jewish mothers, who would have been praying the Shema as their children were being led to the gas chambers, and that Mary certainly would have been praying that same prayer at the foot of the cross. Then he invited everyone at Symphony Hall to stand and sing the Shema. I found that very moving.

I must say I do not remember another religious event of this type held in Symphony Hall. Symphony Hall is an iconic cultural venue for Boston, one of the oldest auditoriums of this nature in the country. I think it a very historic event to be able to have a Catholic celebration there.

It was also very encouraging to see the participation of the Jewish community, with a number of Rabbis there.

Tuesday, I met with Msgr. Jeffrey Steenson, head of the new ordinariate for Anglican groups entering the Catholic Church.

Because the Holy See was approached by many Anglicans looking for a path to enter the Catholic Church in a way that would allow congregations to maintain some of their traditions while, at the same time, fully embracing Catholicism, The Holy Father issued in 2009 Anglicanorum Coetibus, an Apostolic Constitution that allows Anglican congregations, and in our country Episcopalians, to join the Church. Through the directive, they can have an association with others who have been on the same journey.

The document provides that a bishop or a priest be named the ecclesiastical superior of this group. In this case Msgr. Steenson, who was the Bishop of the Episcopal diocese of Rio Grande, and has become a Catholic priest, was put in charge of this group in the United States.

We have one Anglican usage parish in the Archdiocese of Boston. Msgr. Steenson wanted to come to inform me about their plans and how things are going. He wanted to make contact with the archdiocese. I was very impressed with him. He is very zealous, really wants to help Episcopalians who want to become Catholics, and at the same time to maintain a certain cultural continuity with their past.