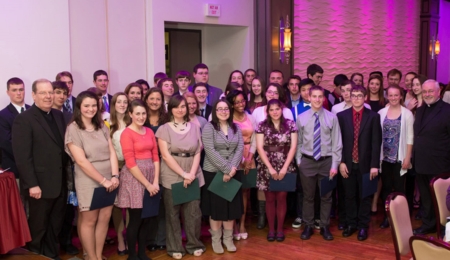 RANDOLPH -- The Office for the New Evangelization of Youth and Young Adults (ONE) honored 120 youth, young adults, and their leaders in ministry from 46 parishes and schools throughout the Archdiocese of Boston at an awards banquet on May 2.

At Lombardo's in Randolph, ONE presented awards to honor Catholic youth, young people, and leaders for their work in middle schools, high schools, scouting, Catholic schools, and youth and young adult ministries.

"This event tonight is extremely inspiring. It is one of the highlights of the year because you see so many young people and their leaders come together in a celebration of what God is doing, in and through their lives," ONE director Father Matt Williams told The Pilot.

The evening began with a blessing from auxiliary Bishop Peter J. Uglietto, before dinner, and presentation of the awards.

"There is probably no more worthwhile an endeavor than encouraging young people in their faith and in their sense of service as disciples of Christ. To serve, to serve others, to serve the mission of the Church, and to serve in their local communities helps them identify who they are as Catholic Christians, and come to know people who can support them in their life remaining faithful to what it means to be a Christian," Bishop Uglietto told The Pilot.

Father Williams described each of the awards for the gathering, before reading a brief summary of the work of each of the recipients.

"You read some of the bios, and you see some of the stories of what they have done. You see that the Holy Spirit is open and alive to those who are open to receive him and to those who will say 'yes' to his promptings," Father Williams said.

Organizers presented the highest national recognition from the National Federation for Catholic Youth Ministry that a diocese can confer to a junior or senior high school youth, the St. Timothy Award, to Elizabeth Abramo of St. Jude in Norfolk and Owen Smith of St. Catherine of Siena in Norwood for leadership in their parish, school, and community.

Nine students received the Cardinal's Youth Award, an archdiocesan leadership award presented for explicitly professing faith "in both word and deed" as Catholic role models to those in their churches and schools.

Albert Tobias, a senior at St. Mary High School in Lynn, told The Pilot that the community service work that led to receiving the award enriched his life spiritually as he prepares for the future.

Middle school student Will Robertson received the St. Dominic Savio Award, an archdiocesan award presented to youth who witness to their faith by serving their parish or school.

"Boys are not usually as kind and helpful as Will is," his mom Katie Robertson said. "He is outstanding. I am proud of him."

In addition to honoring the students, ONE also honored the adults who serve the office and the archdiocese.

ONE leaders presented Deacon Jim Greer and his wife Terri Greer the Norm Plante Award, in honor of Norm Plante, a youth minister from St. Pius V Parish in Lynn known for his work in youth ministry.

"I feel honored, but humbled too, because I never saw it coming. The things that we do, we don't do for awards, we do because we feel called to do them," Terri said.

The couple received the honor for their work, which included a trip to Washington D.C. this year escorting the young people of the archdiocese on The March for Life.

Director of the Office of Outreach and Cultural Diversity Father Michael C. Harrington received the Blessed John Paul II Award in recognition of his service to young adults as "exemplified in the life of Blessed Pope John Paul II."

Lorna DesRoses of the Office of Black Catholics came to support Father Harrington that night.

A youth group leader at Christ the King Parish in Brockton, Marie Lucas received the Light of the World Award, for her work serving the Haitian youth and young people in her community ministry.

Max Poyao and Malida Thelusmi came to the dinner to support their co-worker and friend as the youth group celebrates their 20th year in the community since Lucas founded the group.

"She has been a stepping-stone for a lot of the youth and Haitian youth in the city of Brockton. There are over 300 members that have been in our youth group. They all know Marie. She is a wonderful, wonderful person and has a great heart, and is always there, still helping with the teens. We definitely could not see our youth group without her," Thelusmi said.

"I think it is way overdue. She has always been a great example for the kids," Poyao said.

Other awards that night included awards recognizing accomplishments in scouting, and awards for adults who serve young athletes through the Catholic Youth Organization.

The ONE office continued the awards banquet of the Catholic Youth Organization Hall of Fame Awards Ceremony after the archdiocese expanded the offices serving youth and young adults.