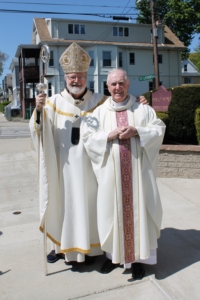 Friday (4/27) I was very pleased to attend the annual American Cardinal's Dinner to benefit the Catholic University of America. The dinner is held every year to raise money to fund scholarships to help many deserving students to have an opportunity to attend CUA, including many from the Boston area. Each year, it is held in a different city, and this year it was hosted by Cardinal George in Chicago. There was a beautiful Mass in Chicago's Holy Name Cathedral, presided over by Cardinal George. I was very pleased to see the new renovations of the cathedral. Like our cathedral, the Cathedral the Holy Cross, the Cathedral of Chicago was built by the famous architect Patrick Keely. However, they had a fire and were forced to do extensive renovations, but they turned out just marvelously.

I continue to be impressed by the wonderful work John Garvey is doing as president of Catholic University. I was very pleased that I was able to be part of this very important event to support the U.S. Bishops' University.

Little Sisters of the Poor fundraiser

Sunday (4/29), we had the Centennial Mass for St. Clement Parish in Somerville, Father Dennis Dever's parish. A fact I found quite interesting was that, in its 100 year history, St. Clement's has had only four pastors, Father Dever being the fourth. I was particularly impressed to see the number of Sisters of St. Joseph who were there gathered for the celebration. They had staffed the parish school for many years and many of those in attendance were natives of the parish. Likewise, many of the priests in attendance were also from St. Clement's. I think this is just one indication of the deep faith and vitality of this parish to have spawned so many vocations to priestly and religious life.

On Wednesday (5/2), I was invited to attend the World Mission Dinner for the Pontifical Mission Societies in the United States that was held in New York. I was very happy to accompany Father Rodney Copp and Maureen Heil from our local office of the Pontifical Mission Societies. They also had a reliquary there of the Mexican martyrs, which was a large silver cross. Boston is one of the dioceses that has been most supportive of the missions. We have had that tradition since the days of Cardinal Cushing, who founded the Missionary Society of St. James the Apostle and put us on a trajectory of being a very mission-minded Church. In our own history, 200 years ago the Society for the Propagation of the Faith in France supported the then-mission territory of Boston. So, now it's our turn to support the emerging churches in the Third World and other missions.