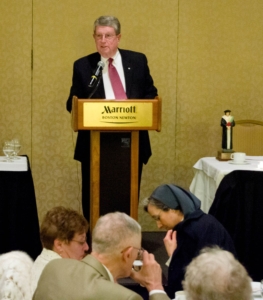 NEWTON -- At their annual dinner April 27, the Pro-Life Legal Defense Fund (PLLDF) honored Attorney Philip D. Moran with the Thomas More Award in recognition of his continued work to protect the unborn.

"Phil has a long and distinguished career as a lawyer who has stood front and center for the unborn for forty years," said Ambassador Raymond L. Flynn, as he presented the award.

The Thomas More Award recognizes recipients for their courage in defending the values of the Catholic faith in the public square. St. Thomas More was executed in 1535 for treason against the Crown of England after Henry VII left the Church, and More did not attend the coronation of the king's second wife Anne Boleyn.

"He was always standing up, and I think that is what this event is all about. It is about people who have courage, people who are not afraid, who defend their values, and speak out in the public forum," Flynn said of St. Thomas More before the ceremony.

Moran received the award in recognition for his years of service as PLLDF president from 1998-2011. He was a founding member of Mass Citizens for Life, and worked with Flynn and U.S. Congressman Henry Hyde on the Hyde Amendment, which barred some public funding from covering abortions.

In his remarks after accepting the award, Moran thanked the fund, acknowledged the past recipients of the award, and called attention to the importance of the 2012 elections.

"I submit that our Constitution is at risk, our basic charter, described by William Gladstone in 1878 as 'the most wonderful work ever struck off at a given time by the brain and purpose of man.' Yet, some of our present jurists and, even our President, consider it archaic, quaint and I guess even flexible," Moran said.

He added that the November ballot will be particularly important at the Massachusetts state level.

"Here in the Commonwealth, we will be voting not only for a new president -- hopefully -- and nine representatives to Congress, but we will be asked to decide if we want to legalize physician assisted suicide. The proponents refer to it as Death with Dignity or Compassion in Dying, but the fact is that physician assisted suicide is suicide or murder with an accessory," he said.

But beyond the serious pro-life topics addressed, the evening did have its lighter moments.

Before the award presentation attorney Thomas M. Harvey engaged the crowd with a few Irish songs. Ambassador Flynn also sang in his turn at the podium.

"This is not in the script, but I am the former mayor and this is part of the Boston area. As they say in Boston, 'The mayor can do whatever the hell he wants to do,'" Flynn said.

"If Tom's going to sing a song to Phil and you, I am too," he said, before he sang "A Mothers Love Is A Blessing."

Al Santosuosso and his wife Vanessa, who said they attended the event to support their Catholic values, said they enjoyed the opportunity to network in the local pro-life community -- as well as the singing.

"It is always nice to be around people who have the same belief set as you do. It is uplifting," Vanessa said.

The current president of the PLLDF Henry C. Luthin said Moran has "been in the trenches" for 40 years on the pro-life cause.

"He has been a mentor and role model for me and for many other younger pro-life attorneys," Luthin said.

Moran said he plans to continue his work even as the pro-life position faces challenges in the public arena.

"Have we in the pro-life movement been successful in the last 40 years? Not always, but during these forty years of frustration and anguish, we have been persistent. What we have done, much to the dismay of our opponents, is to keep the issue alive and we have done that," Moran said.