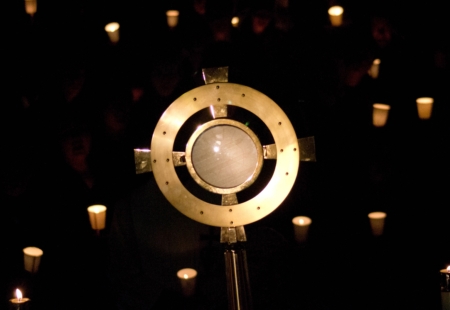 BOSTON -- At the Fifth Annual Eucharistic Congress for College Students and Young Adults, young Catholics explored the importance of the Eucharist in the Catholic faith with sacraments, speakers and a procession through the North End.

The Archdiocese of Boston's Vocations Office, the Office for College Ministries, and The Office for the New Evangelization of Youth and Young Adults collaborated with restaurants and businesses in the North End to present the Eucharistic Congress themed "Catholic: Ordinary People, Extraordinary Lives" for almost 400 college students and young adults from the evening of Friday April 27 through late night Saturday April 28.

To highlight the theme of the congress organizers included speakers on related themes and service projects for the young people.

"Our guest speakers predominantly focused on how we can live the Eucharist in our daily lives through sanctifying our work, school, and relationships," Christina Siebertz, one of the organizers, said.

In her talk Friday evening talk, "Bodies are Not Optional: Living Catholic in the Digital Age," Media and film student Sister Helena, a member of the Daughters of St. Paul, explored Pope John Paul II's "Theology of the Body" in conjunction with philosophies of Daughters of St. Paul founder Blessed James Alberione.

Saturday morning, Father Borek's delivered his talk "Taken, Blessed, Broken and Given: Living The Eucharist Everyday" on the topic of how thinking about the Body of Christ in the Eucharist can impact the workings of day-to-day life.

Then, on Saturday afternoon, in his talk "Working Out Salvation," Executive Director of the Theology of the Body Institute Damon Owens contrasted the focus on work in society with the Catholic focus on contemplating the gifts provided by God through Christ in the Eucharist.

His talk focused on the call of St. Paul to Christians in Philippians 2:12.

"When Paul speaks about working out our 'salvation in fear and trembling,' he is not saying, 'Buck up, work hard, so God is going to really like you,'" Owens said.

He pointed to the contemplation and stillness of Eucharistic Adoration in contrast to the secular focus of fast-paced work mentality through the lens of the passage and Catholic tradition.

"How often do we frame our retreats as getting away from it in order to rejuvenate to get back to it, where the reality is getting back to the job, getting back to our responsibilities? But every once in a while we have to back up and catch our breath," he said.

He said favoring the toil of this world over the contemplation of the gift Christ offered the world in the Eucharist is like holding a preference for exhaling over inhaling.

He said in his struggles with the idea of always working hard, he had trouble finding stillness when he did adoration with his wife.

With time, he said he realized the need for balance between serving God in action and loving Him in adoration.

In the spirit of balance between loving and serving organizers also planned service projects for participants. Organizers said experiences and participating organizations from past congresses helped to establish the service project portion of the weekend.

Organizers provided congress-goers with 25 service options for participating in the projects including feeding the homeless, praying at a local Planned Parenthood clinic, and writing to confirmation candidates.

"We looked at various opportunities that people said they have enjoyed in the past. We have had some sites working with homeless ministries, some working with the elderly, and visiting nursing homes. One of the ones we did was at Regina Cleri, visiting the retired priests," team leader for the service projects Mary Beth Rosa parishioner of St. Mary's in Dedham said.

Participants worked with Father Bill's Place in Quincy, The Little Brothers of St. Francis, The Cathedral of the Holy Cross, local parishes, and other organizations and parishes in the archdiocese.

One volunteer said he enjoyed his experience working at the cathedral, which turned into a learning opportunity and a small adventure of sorts.

"I have seen things that I thought I would never see, tombs and places in the cathedral that I just had no idea were there," Kevin Burke, 18, a parishioner at St. Mary's of the Assumption in Dedham and a freshman at Framingham State University said.

He said he saw the crypt were three past cardinals are buried, explored a room with religious artifacts from various popes and cardinals, and learned the significance of the three cardinals' hats that hang suspended from the ceiling over the altar of the cathedral.

Cardinal Seán P. O'Malley celebrated Mass for the participants before the adoration and procession through the streets of the North End.

"It is wonderful to see all of you here for the Eucharistic Congress. It is such a moment of grace for the whole Church. We are grateful all of those who gave their time to organize this congress," the cardinal said.

The highlight of the Eucharistic Congress came in the last event of the evening. After a half hour of adoration, the laity, faithful, and religious proceeded into the streets to proclaim the faith publicly.

With the seminarians of the archdiocese in the front, followed by the consecrated and religious, the cardinal and vested priests, and the monstrance containing the Blessed Sacrament. Those who filled the pews at Sacred Heart Church joined the procession, carrying votive candles.

The vigil made its way to Sacred Heart Church in North Square, stopping for public adoration near the Paul Revere House, before proceeding north to St. Leonard of Port Maurice Church on the corner of Hanover and Prince Streets where the procession ended with prayer and thanks from the cardinal and Father Matt Williams.

The cardinal called on the assembly to pray for vocations, in honor of Good Shepherd Sunday, which was being celebrated that weekend.

Father Williams thanked the priests, the pastors of each church, and the cardinal. He also called for applause for the priests who participated.

"Can we ask our priests to please stand? Where are our priests? They are in the back. Can we get a round of applause for our priests?" he asked.

The crowd responded with applause, before the cardinal closed the evening with a blessing.