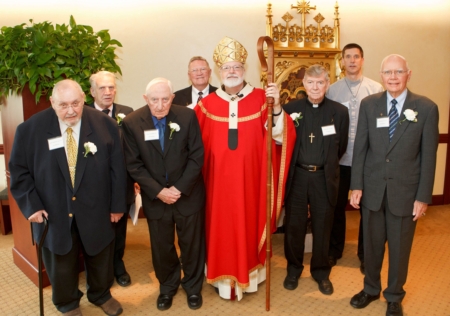 That evening (April 20), I celebrated Vespers and holy hour with the seminarians, and then ... we went to the movies!

Alexis Walkenstein at the Maximus Group had arranged a private showing of the movie "For Greater Glory," which is coming out in June.

Graham Greene, after his conversion to Catholicism, went to Mexico as a journalist and also, while he was there, wrote report for the Vatican on the persecution. When he returned, he wrote the book "The Power and the Glory" which, to me, is one of the greatest Catholic novels. It is the story of the last priest in the State of Tabasco, Mexico, because all the other priests have been driven away by the government. They were told they could only stay if they married and pledged allegiance to the government. So, he was the only priest who was left and, in the end, he is executed by firing squad.

Many Americans do not know very much about the persecution, but a lot of Catholics are acquainted with that book, the power and the glory by Graham Greene and also with the life of the Jesuit Miguel Kroll whose martyrdom is often spoken about the states. Though there were many people who suffered for the faith during this period of Mexican history. Blessed Pope John Paul II beatified about 25 people who were martyred in this period and I believe two have already become saints.

The Knights of Columbus are one of the groups that is promoting this movie and I wholeheartedly recommend it.

On Saturday, I attended the Centennial celebration of the Father Daniel Kennedy Council Knights of Columbus in Needham.

They renamed the Council for Father Dan Kennedy who, many of you may remember, tragically passed away in 2008, shortly after his ordination. His family was there, as well as a number of priests with past or present connections to the Council including Bishop Hennessey, Father David Michael, Father Guy Sciacca, Father Phil McGaugh, Father Patrick Armano and Father Paul Sullivan and friends of Father Kennedy -- Father Matt Westcott and Father Joe Mazzone.

At the ceremony, I thanked them for renaming the Council in honor of Father Kennedy. I also thanked Father Dan's family and his parents, Dan and Allison.

Father Kennedy was a wonderful young priest whose time with us was very short before God called him home, but he did so much good and was a great promoter of vocations. This council, in particular, has been very supportive of our seminarians I wanted to thank them for all of that work.