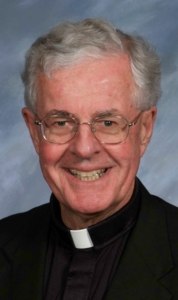 Imagine an ordination where everyone in the church is familiar to you.

That is what happened to Father James F. Rafferty 49 years ago.

Because five men were being ordained to the priesthood from the same parish on the same day, the ordination was conducted right in his home parish, Holy Name in West Roxbury.

"Our parish was kind of known for having many vocations," he recalled. "But it was really special to be ordained at your own church."

On Feb. 2, 1963, Father Rafferty was ordained by Bishop Eric Francis MacKenzie, auxiliary bishop of Boston. Now, almost a half century later, he has been granted senior priest status effective June 5.

His assignments have been varied. He is currently pastor at St. Paul Parish in Hingham, where he has served since 1994. He was involved in campus ministry for Framingham State College, the University of Massachusetts in Boston and the Marist Seminary in Framingham.

In 1980, he was made associate director for the program of pastoral preparation at the North American College in Rome.

"That was a lot of fun," he said, noting that he was responsible for giving young seminarians pastoral field experience, as well as teaching them homiletics.

"Mind you, I was teaching pastoral preparation and then I became a pastor," he laughed.

Father Rafferty was first made pastor in 1986, two years after returning from Rome, at St. Malachy Parish in Burlington. He remained pastor there until 1994, when he was moved to St. Paul Parish in Hingham.

"Being a pastor has been the pinnacle of my priesthood," he said.

"It is a very noble office," he continued, adding that "getting to know the people in the parishes is always wonderful."

Father Rafferty hopes to live as a senior priest in residence at an area parish, helping the parish however he can, although he does not yet know where he will reside.