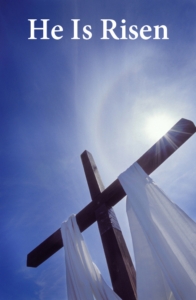 lead us to a share in the joys of heaven,

so that the humble flock may reach

where the brave Shepherd has gone before.

The first two prayers of today's collect are simple. They ask that we might share in the joys of heaven. From the time we were little children we have shared this one joy of all the followers of Christ: to go to heaven and to dwell in eternal bliss with the saints and angels.

But this journey is defined in a more expansive way in the last half of the prayers, in terms of two figures: a humble flock and a brave shepherd.

Maybe that's why we Catholics spend so much time on our knees. For we are little and he is big; so little, so broken, so desperately in need of God that without him we are nothing.

Notice we are not just humble sheep, but a humble flock. We are his people, a royal priesthood, a holy nation, the brothers and sisters of Jesus and sons of the one Father, baptized in the blood of the Lamb. We are a gathered people, a holy people, and the people of God ... a flock, gathered from among the nations to be his Holy Church. We are ever consciousness of our littleness and our utter dependence on him.

What is that way? He is the way, the one who walked the Via Dolorosa, the road of sorrows, the road to Calvary. The only way to heaven is to fulfill his command: love one another, as I have loved you. The one who opened his arms on the cross, who took our sins upon his shoulders, whose heart was pierced with a lance for our sins, has shown us the way.

The way this brave shepherd shows us is the way of love; a love which forgives every wrong, which prays for the one who persecutes us, who loves the one who plots behind our back. It is the love which turns the other cheek, which seeks out the ones whom everyone else has forgotten, and which gives every drop of blood, even unto death ... death on a cross.

If that's not a brave shepherd, I don't know what is. And only such a shepherd can show us the way to get to the joys of heaven.

Msgr. James P. Moroney, presently professor of liturgy at St. John's Seminary, Brighton becomes the 20th rector there on July 1, 2012. This is the fourth of a series of reflections on the collects of the Easter season.