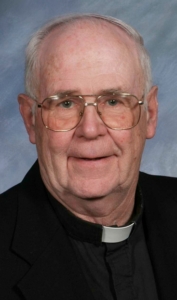 Father Francis E. Daley, pastor of Sts. Martha and Mary Parish in Lakeville, is at the threshold of a new phase in his life. Beginning June 5, he will officially be a senior priest.

But he's not planning to stop.

"I'll be helping out in parishes, as they need me," he said.

"And resting a bit as well," he added with a chuckle.

Father Daley was born on Sept. 30, 1937 in Wellesley. As a child, he and his family attended St. Paul Parish in Wellesley.

He attended St. John's Seminary and was ordained on Feb. 2, 1963 by Cardinal Richard Cushing at the Cathedral of the Holy Cross.

His first assignment was at St. Bernadette Parish in Randolph, where he remained for four years. He was then assistant priest at St. Benedict in Somerville, followed by Sacred Heart in Cambridge.

In 1968, Father Daley returned to St. Bernadette Parish in Randolph, where he was assistant priest for five years.

Father Daley then became the chaplain at Malden Catholic High School, remaining there until 1979, when he was made pastor of St. Thomas of Villanova Parish in Wilmington.

In 1985, Father Daley was made pastor of St. James Parish in Arlington, where he remained until 2004.

In 2004, Father Daley became the pastor of Sts. Martha and Mary Parish in Lakeville.

Father Daley, looking back on his priesthood, is quite happy.