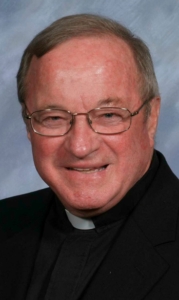 Father Richard Crowley, pastor of Sacred Heart in Middleborough, says he has much to be thankful for in his 48 years as a priest.

"For me, I think what I most have loved is the opportunity to meet people who are good, sincere, working hard to build their faith -- these are things I will treasure," he said.

As he prepares to retire, Father Crowley looked back on his priestly life.

Born Sept. 12, 1937 in Lowell, Father Crowley's family moved to Milton when he was four. He and his family immersed themselves in St. Mary of the Hills Parish in Milton.

One of five boys, Father Crowley and his brothers would often help out in the parish -- doing yard work, cleaning, painting, repairing.

Father Crowley, as well as two of his brothers, would ultimately heed God's call to the priesthood.

He was ordained Feb. 6, 1964 at the Cathedral of the Holy Cross by Cardinal Richard Cushing.

His first assignment was to Holy Family Parish in Duxbury, where he remained for only six weeks before we was moved to St. Joseph Parish in Holbrook.

"There were three pastors that passed away suddenly, so I was moved to a parish that was larger and in need of more help," he explained.

"Hospital ministry was most rewarding from a priestly standpoint," he said.

In 1983, Father Crowley returned to St. Joseph Parish in Holbrook, where he remained four years.

In 1987, he was made pastor of St. Francis of Assisi Parish in Braintree. He served that parish until 1998, when he was moved to Sacred Heart Parish in Middleborough.

After he is granted senior priest status on June 5, Father Crowley will be living with one of his brothers in Mattapoisett. He is hoping to keep busy, and has taken up bird carving.