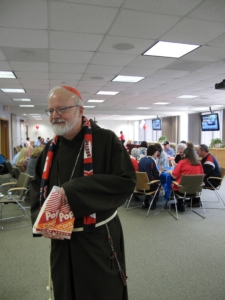 'It also was the day of the Red Sox home opener (4/13). So after the Mass we had a sort of "take me out to the ballgame" lunch for the staff with hot dogs, hamburgers, popcorn and such.' Pilot photo/CardinalSeansBlog.org

... on Thursday (4/12) I was visited by Paul Fanning and Connor Schapiro, members of the St. Boniface-Haiti Foundation that runs the Catholic hospital in Fond des Blanc in Haiti. This is a local group that was founded in St. Boniface parish in Quincy. The foundation has done an extraordinary job providing healthcare for the Haitian people. They run one of the largest and best hospitals in the country. Paul is on the board of the foundation and Connor has lived in Haiti for quite a long time and now splits his time living in both the US and Haiti. They came to give me an update on some their activities.

That afternoon (4/14) we travelled to Lynnfield to celebrate the 75th anniversary of Our Lady of the Assumption Parish. Father Jack Farrell has been pastor there for a number of years and has done an extraordinary job. The parish is very vibrant; they have a youth choir that sang and a very good parish choir. There were also a number of high school-aged altar servers -- there were just so many signs of vitality. It was very good to be able to be together with the people of the parish as they marked this important milestone.

Just as Metropolitan Methodius joined us for our annual Chrism Mass at the cathedral during Holy Week, and brought us greetings from the Greek Orthodox community (as regular readers will remember), so I went to be present for their Easter vigil which this year was the Sunday after our Easter (4/15), according to the Julian calendar. During the liturgy I was invited to proclaim the Gospel and address the people. It is always a great honor and pleasure to join our Orthodox brothers and sisters for this most holy night of the Christian year. I came back directly from the Greek Orthodox vigil to attend the Easter celebrations of our Ge'eze Rite community that were still going on. These are the Ethiopian and Eritrean Eastern Rite Catholics whose community is based in the Cathedral of the Holy Cross.

On Monday (4/16), I attended the Knights of Columbus Lantern Awards ceremony at the Sheraton Hotel in Framingham. The Lantern Award has been presented to an outstanding citizen by the Massachusetts State Council of the Knights of Columbus every year for over 50 years at their Patriot's Day Dinner. The recipient of this year's award was Father Bill Devine, a priest of the archdiocese who has been deployed many times in Iraq and Afghanistan. He gave a very moving witness of what it was like to serve the troops in those war zones. We see the role of the military chaplain as a very important service to the Church, and the Archdiocese of Boston has always tried to be very supportive of our priests who choose to serve. It is very important that the Church be present to this demographic of young people, particularly those who are in harm's way because of military service. In fact, we announced this week that our Secretary for Parish Life and Leadership, Father Tom Foley, will be leaving to become a military chaplain -- just another example of the fine men who have chosen to serve their Church and their country in this way.