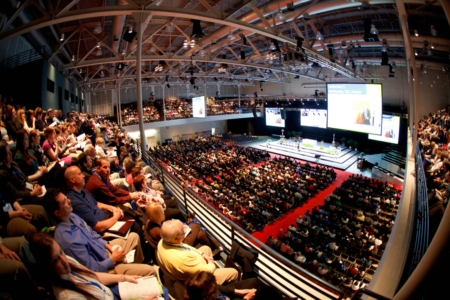 BOSTON -- A national and international crowd of Catholic educators converged on Boston April 11 to kick off the three-day National Catholic Educational Association 2012 Convention and Expo.

According to organizers, more than 10,000 participants registered for the three-day event at the John B. Hynes Convention Center. The NCEA provided guests of the convention 300 workshops on topics relevant to Catholic education, an exhibit hall showcasing 267 education-related vendors, and a list of nationally recognized keynote speakers.

Father Ronald Rolheiser, OMI, president of the Oblate School of Theology in San Antonio, Texas, gave the opening keynote address entitled "It's a Big Enough Church." He focused the talk on delivering a message of tolerance among the faithful, enemies and even political rivals.

He addressed the danger of becoming bitter and responding to attacks with attacks, anger with anger, and intolerance with intolerance.

"There is just no virtue in that, you are simply giving back the energy received and we are hard-wired for that. We are not hard-wired for forgiveness," Father Rolheiser said.

He said the faithful need to be influenced by the writings of the Gospel, and particularly the story of Jesus washing the feet of the disciples.

Father Rolheiser used the image of Jesus removing his outer garment as revealing his true self.

After the keynote, Cardinal Seán P. O'Malley celebrated the opening Mass for the convention attendees in the nearly filled Veteran Memorial Auditorium, which seats 3,000.

Before beginning the Mass, the cardinal greeted the crowd with a message of support for the importance of the mission of Catholic education.

"We are so grateful to all of you for the goal that you have in Catholic education, one of the most important ministries of our Church," the cardinal said.

Archbishop Wilton D. Gregory of Atlanta, chairman of the NCEA board of directors, joined the cardinal, as well as bishops and archbishops from all over New England and the country on the altar.

In his homily, the cardinal again touched on the mission of Catholic schools in the Church.

"Academic excellence is important, but we must be convinced that we have something greater to give our students. We can help them to rise and walk in newness of life," the cardinal said.

The second day of the conference opened with a morning prayer before Mary McDonald, superintendent of Catholic schools for the Diocese of Memphis, gave her keynote address entitled "A Call to be God's Arms."

McDonald said two encounters with crucifixes with missing arms led her to the conclusion that people must be the arms of God in his work on earth. She said her first encounter with an armless crucifix was in a small mission church where the priest told her why he hung the gold crucifix above the altar unrepaired after buying it.

"When he got back with the crucifix, the sisters there convinced him to hang it just as it is, without arms, so that anyone who saw it would know that they are God's arms in the world," she said.

In his address "Defining 'The Future' and Responding to its Challenges," Father Hehir presented a series of challenges and opportunities facing the Church today in the context of the current social and political climate in the world.

"In the end, the transmission of the faith is dependent on people who are possessed by a vision and a direction that they can share," he said.

The convention marked the sixth time that Boston has hosted the NCEA convention since 1909; the city last hosted the event in 2004.

The archdiocese of Boston ranks ninth among U.S. dioceses in enrollment of Catholic school students, with 122 schools serving 41,964 students.

Mary Grassa O'Neill, Secretary for Catholic Education and Superintendent of Catholic Schools in the Archdiocese of Boston noted that the entire region of New England hosted the convention.

The annual convocation of the National Association of Parish Coordinators and Directors of Religious Education and the Catholic Library Association held convocations and conventions concurrently with the NCEA convention.

"One of the things NCEA does best is to convene people, to gather them together from all aspects of Catholic education to share ideas and to learn from each other. Our annual convention does just that and we are looking forward to this year's meeting," NCEA President Karen Ristau said.

"You can tell our members like Boston conventions because we keep coming back. In addition to the wonderful programs NCEA plans, Boston offers so many opportunities for our participants to gather and socialize informally after convention hours," she said.