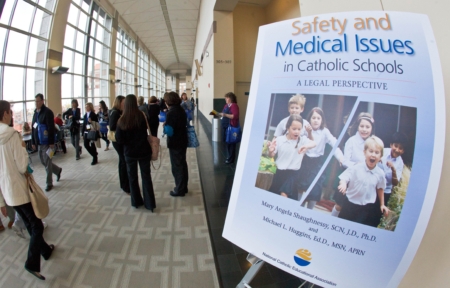 A sign stands outside the April 12 workshop on student safety presented Sister Mary Angela Shaughnessy Father Michael Huggins, both of Louisville, Ky. With increasing access to technology, educators must be "more vigilant than ever" of what students do online, said Sister Shaughnessy. Pilot photo/Gregory L. Tracy

BOSTON (CNS) -- When the reputation of a student, teacher or school can be brought down by a YouTube posting, blog or anonymous email, educators need to be "more vigilant than ever."

That was the advice for hundreds of participants attending an April 12 workshop during the annual National Catholic Educational Association convention in Boston.

More than 10,000 educators attended the April 11-13 convention filled with workshops focusing on professional and spiritual development and the challenges faced by Catholic schools and religious education programs in today's modern world.

During the convention, several workshops focused on the use of technology and the problem of online bullying. Sister Mary Angela Shaughnessy, a Sister of Charity of Nazareth, Ky., and executive director of the Education Law Institute in Louisville, Ky., told Catholic school teachers and administrators that they cannot ignore what students are doing online.

She said she gets asked often by school leaders: "Can't we just say it's not our problem?" since Facebook postings, for example, are not school-related activities.

Her response is point-blank: "No."

When students defame their school, teachers or other students online, it becomes a school-related issue that needs a response, she said.

"Don't give that up. Deal with the problem of cyberbullying," which she described as the top issue she gets questions about.

Sister Shaughnessy defined cyberbullying as "willful and repeated harm through computers, cellphones and other electronic devices" done by those under the age of 18 that could fall under felony charges for adults who take such actions.

She also said the basic premise of what these students are doing isn't new, it simply uses another venue.

As she put it: "The schoolyard bullies have moved online."

Which means teachers must be on the lookout and pay attention to clues they get that something's amiss.

She said teachers can be held liable for cyberbullying if they know, or even should have known, it was taking place.

Social media laws are not well-established, she said, but they do point to the need for response on the part of school officials when bullying takes place.

That means if a student happens to bring up something offensive that happened to him or her online, teachers should ask to see the offending item and tell the school principal about it.

"Schools can search computers just like they search lockers," she added.

But as teachers are paying attention to online activity, or getting involved in it themselves, they have to be careful to keep within their boundaries, she noted.

For example, teachers should not be friends with their students on Facebook nor should they be sending them emails late at night or providing students their cellphone numbers, she said.

Father Michael Huggins, a priest from the Archdiocese of Louisville and author of the NCEA publication: "Internet and Social Media: What Parents Need to Know," also spoke at the workshop and pointed out the different ways young people and adults approach technology.

"Adults feel more stressed by technology," he said, whereas "kids think it's fun."

The priest, who is the associate director of the Family Nurse Practitioner program at Bellarmine University in Louisville, said research shows that young people's familiarity with modern technology also has drawbacks.

For instance the "instant friendship and intimacy" they find is often misleading. They also tend to presume that what they read online is true. He also noted that young people might be "adept communicators" online but not always in talking to others.

He said parents tend to be disconnected from the electronic world that is so prevalent in their children's lives. Sister Shaughnessy agreed but said parents shouldn't step away from it just because they "don't have the ease of technology."

Instead, they too need to be monitoring what's going on, checking the online history, for example, of websites their children have visited.

She said a lot of adults might not understand Facebook or have the time to use it, but that shouldn't hold them back.

Sister Shaughnessy, a longtime NCEA convention speaker on legal issues, said she even has taken the plunge.

"I know I said I wouldn't join Facebook," she told the crowd, admitting that she recently did so only because her religious community did.