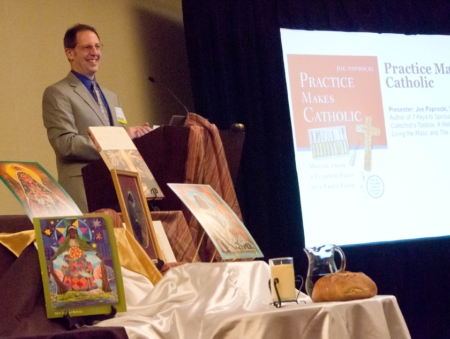 BOSTON -- Among the 10,000 Catholic educators gathered for the 2012 National Catholic Educational Association Convention were parish catechetical directors who participated in their own special track of programs and workshop during the three-day gathering.

His address presented the idea that catechists need to help their students see and explore their own Catholic identity as they learn.

"We need to be more devout, more intentional, about instilling Catholic identity than we used to be, because the way that we used to grow up and the way young people are growing up today, are so completely different," he said.

In the accompanying slide show, Paprocki used a black-and-white photo of children playing "Mass" with a spaghetti strainer standing in for a collection basket, a young woman dressed up as a nun, and a young Paprocki dressed as an altar boy to show how the local Chicago culture expressed a Catholic identity in his neighborhood.

"See these other faces that I am circling? These are kids from our neighborhood. These are not family members. We would call our friends and say 'Do you want to come over and play Mass?' They would show up," he said.

Paprocki reiterated throughout his talk that he had no intention of presenting a message of nostalgia for times gone by, but instead he challenged his audience to think about how to promote a Catholic identity in their teaching.

He told the catechists to break into groups and imagine themselves as consultants helping a director make a film. In the scenario, the director needed the groups to advise him on objects and decoration to make the set look more Catholic, and actions that actors might do to assert a Catholic identity for their characters.

Suggestions ranged from crucifixes and paintings of the last supper in the home, to characters making the sign of the cross and blessing the children.

Paprocki said asserting Catholic identity for students depends on examples and acculturation by catechists, but in order to do this successfully catechists must learn why they do the things they do, as opposed to letting tradition degrade into superstition.

"When we cannot give good explanations for what it is that we do, then we become a laughing stock," he told The Pilot.

"A novena, praying for nine days, is not a magical power, but it is meant to help us get in touch with this notion of how our fervent prayer can bring us into touch with the power of God," he said.

He said Catholic identity is rooted in "a sense of sacramentality, commitment to community, respect for the dignity of human life and commitment to justice, reverence for tradition, and a disposition to faith and hope and not despair."

He said in asserting a Catholic identity Catholics tend to use objects and symbolism in the tradition revealed in the Bible: that God tends to speak through symbols -- such as revealing himself to Moses through the burning bush.

"We Catholics tend to express everything outwardly. So, we have this language of faith that we use," he said.

"The reason that we Catholics use this outward language of signs and symbols is because this is God's language. God does not always use words," Paprocki said.