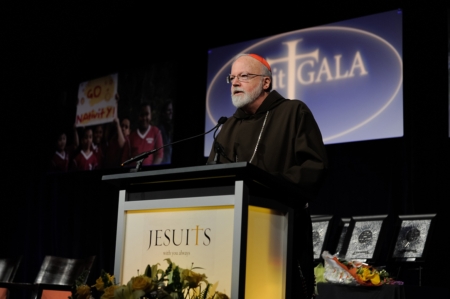 ''Fittingly enough, during the NCEA convention there was also the annual Jesuit dinner, which this year honored the two Nativity schools that are in Massachusetts -- one in Boston, and the other in Worcester.'' Pilot photo/CardinalSeansBlog.org

On Easter week we remember in a very special way the resurrection of our Lord. In the Easter Vigil, as we proclaimed the Gloria, we marked that moment that changed the history of the world. At the cathedral this year we actually did the blessing of the fire outside, in the garden next to the Cathedral, so it was very impressive. One of the seminarians, Emanuel from the Redemptoris Mater Seminary, hand painted the Paschal candle, which is very beautiful.

Sunday morning, as I do every year, I celebrated Easter morning television Mass at WHDH Channel 7. Then we had the 11:30 Mass at the cathedral. It was a very impressive to see the Church filled. Then, in the afternoon we had lunch with my relatives, the Mulligans, who were in town from Florida visiting their son who is at Boston College law school.

We were very pleased this year to host the over 10,000 people who came to Boston to attend the National Catholic Education Association Convention, which was held at the Hynes Convention Center April 11-13. Though the convention was actually held in Boston, the convention was sponsored and organized by all the dioceses of New England. It was a fantastic example of collaboration among the dioceses. I was asked to celebrate the opening liturgy Wednesday morning. There were a number of bishops who joined us for the Mass, among them Archbishop Wilton Gregory of Atlanta who is the chairman of the NCEA Board of Directors.

One of the most impressive aspects of the opening ceremonies was the joint high school choir. Students from nine different high schools throughout the archdiocese came together to perform for us. My understanding is that they only practiced a few times together before the actual convention, but they were just marvelous. You would never guess that they had really just met each other.

Catholic education is the soul of evangelization. It is not just about communicating information, but forming people in the faith and leading them to Christ. A huge part of our effort is in the Catholic school system, which is a great treasure of our Church. We are very proud of the wonderful work that is being done by our Catholic schools that exist because of the sacrifices of many of the faithful, particularly communities of religious women who helped to establish our schools. And now the lay teachers and administrators who have stepped up to the plate make it possible for this very important ministry to continue.

It is important for us to come together and celebrate these achievements and also encourage people who are involved in promoting Catholic identity in educational excellence in our Catholic schools. Fittingly enough, during the NCEA convention there was also the annual Jesuit dinner, which this year honored the two Nativity schools that are in Massachusetts -- one in Boston, and the other in Worcester. These honored schools are doing excellent work in offering inner-city students free Catholic education and preparing them to be Catholic leaders of the future. The gala was held at the Marriott Copley Place. Over 1,200 friends and Jesuits attended. The event raised over $1.1 million to support the formation and care of Jesuits and the apostolic works of the New England Province. During the evening the provincial, Father Myles Sheehan, spoke. He gave a very good talk about Jesuit spirituality. He said the Jesuit order exists to serve Christ and to praise His name. And then the two headmasters of the schools, who received the honors in the names of their schools, gave very significant addresses concerning the mission and Catholic identity of the schools.