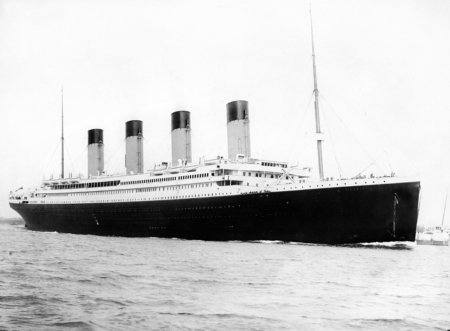 A century ago this week, the world was shocked at the sinking of the great steamship the Titanic and the loss of life near the coast of Newfoundland.

The Titanic, built in Belfast in 1911, set sail on its maiden voyage from Southampton, England at noontime on April 10. The ship stopped at Cherbourg, France at 6:30 in the evening and at Queenstown, Ireland at 11:30 the next morning to pick up more passengers. A total of 2,228 were on board as the ship headed off to the open sea. Historical research tells us the ship struck an iceberg at 11:40 p.m. on April 14 and sank at 2:20 a.m. on April 15. The Carpathia, one of several ships responding to distress calls from the stricken liner reached survivors in lifeboats at 4:10 a.m. News of the disaster made headlines in most American newspapers that Monday morning but confusion reigned as to who was alive and who has perished. The Carpathia reached New York on Thursday evening, April 18 with hundreds of reporters and families awaiting their arrival.

The following week, The Pilot of April 27, 1912 ran a front page story with the headline "Death Sat Upon The Bow Of The Titanic."

An excerpt from the story read: "Little did the ship's company, happy with the thought of soon being with friends and loved ones, think that few would see the sun rise on another day. Death sat upon the bow but no one beheld him. The vast sunlight had flashed from the Titanic's deck. For many hundreds, life's voyage had ended. In a few short hours, little remained of that 'Last Word' in marine construction but floating bodies of the dead and debris of magnificent appointment which had fascinated all by their beauty. The icy waters had closed over the grave of the proud Titan of the seas and soon she will be naught but a memory."

Cardinal O'Connell was in the nation's capital for a meeting of the trustees of the Catholic University of America with Cardinal Gibbons of Baltimore and Cardinal Farley of New York, when he received word of the tragedy. The three cardinals sent a message to President Taft, expressing on behalf of the trustees, "their profound grief at the awful loss of human lives attendant upon the sinking of the steamship Titanic."

The message also expressed "the hope that the lawmakers of the country will see in this sad accident the obvious necessity of legal provisions for greater security of ocean travel."

Two world figures affected by the tragedy were Pope Pius X and President Taft as they both mourned the loss of life that included Major Archibald Butt. The major had met with the pope days before boarding the ship and was a close friend and top military advisor to President Taft. Also grieving was Cardinal Farley. Returning to New York, the cardinal cancelled any plans for his 70th birthday that weekend and spent time consoling survivors at St. Vincent Hospital.

Three priests lost their lives in the sinking. Father Josef Peruschitz was a Benedictine monk and native of Bavaria. Father Jouzas Montvila was a native of Lithuania. Father Thomas R. D. Byles was from London and heading for New York to officiate at the wedding of his brother. From The Pilot account, we read that the German priest and Father Byles had celebrated Mass that Sunday morning. Three women survivors related how Father Byles urged people to be calm, prayed and offered absolution and his blessing and twice refused to enter a boat to save himself. William Byles and his bride Katherine Russell kept their wedding date and were married the following Sunday, April 21 in Brooklyn. Later in 1912, they toured Europe and met with the pope who declared Father Byles a martyr for the Church.