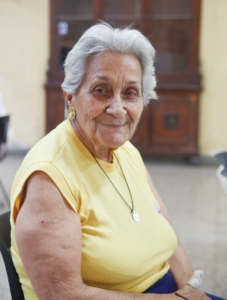 AnaMaria Claramunt, 86, comes daily to the senior program run by La Merced Church in Havana. "[The Casa] gives us everything... and most importantly they give us love," she said. Pilot photo/Gregory L. Tracy

There she and 59 other members of the senior day care center are greeted with a smile by Teresa Fernandez, the director of the Casa de Abuelos, Spanish for "House of Grandparents."

The center was one of the Church-run programs experienced by Boston pilgrims during their March 22-29 visit to Cuba culminating in the Mass celebrated by Pope Benedict XVI in Havana's Revolution Square.

"I love it here," said Claramunt, she said gesturing to her friends. "These people have become my family."

"[The Casa] gives us everything," she said, "food, clothes, a place to belong -- and most importantly they give us love."

Claramunt is one of the lucky ones, according to Father Justo Moro, a Vincentian priest from Spain who helps run the program.

"The government allows only 60 people to belong to the program because our kitchen and shower facilities can only accommodate that many," he explained.

Operated out of the Church of La Merced, a church that historically provided asylum for African slaves, the waiting list to get into the facility is long, something that Father Moro is hoping will soon change.

"Thanks to support from the Church in Europe, the Casa de Abuelos is beginning to build a larger facility next door," he said, adding that he hopes that the new facility will allow them to serve many more of the aging population in Havana.

"The Casa de Abuelos provides its members with a hot breakfast, a midafternoon meal and many of the basic necessities these people lack," explained Father Moro. "We take care of them as much as we can, with the resources that we have."

In order to qualify, seniors must live within the area of La Merced Church and be able to make their own way to the center, as there is no transportation to the facility, he said.

Priority is also given to seniors with the lowest pensions, the equivalent of $12 per month.

"Participants do not need to be Catholic," Father Moro said. "As long as they need help, we are here to help them."

Once accepted into the program, they are given care even if age or illness render them homebound.

In addition to the food and basic necessities provided to the seniors during the week, the Casa also gives them enough food to take to their homes so they can nourish themselves on weekends.

"This is a great house because they [Father Moro and Fernandez] love the people. They take care of us, they help us to spend time doing things we love and there's a real unity here," said Ines Viera, 84.

Viera, who has been part of the program for three years, should know. Prior to coming to the Casa, she belonged to a government-run senior day program where, she said, "there was nothing to do. I felt like a number there."

Now, she participates in a senior choir, consisting of nine members. Dominoes, cards, cooking and other activities fill her day.

And then there's conversation. Throughout the open-air courtyard, in the hall filled with long tables for meals and small tables for dominoes -- everywhere, people mill about, chatting, laughing. Enjoying each other's company.

"This place is a marvel," Viera said.