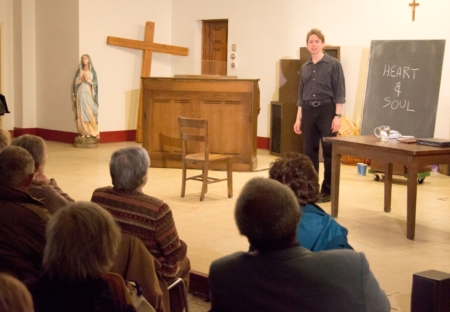 Michael Mack performs his one man show "Conversations with My Molester: a Journey of Faith" for nearly 200 guests, sponsored by Caring for the Soul: Faith in Recovery, The St. Paul Artist's Group, and The St. Paul Laity Group at St. Paul Catholic Church in Cambridge on March 29. Pilot photo/Christopher S. Pineo

CAMBRIDGE -- Since debuting his one-man show in January, Michael Mack has performed for various audiences at different venues, but never a Catholic audience in a Catholic church.

That changed when Mack took the play "Conversations with My Molester: A Journey of Faith" home to his own parish. On March 29, he performed the play at St. Paul in Cambridge and took questions afterward from the clergy, parishioners and guests.

The play disclosed decades of Mack's life for the audience, in a narrative form aided only by the props on stage.

At age 11, abuse at the hands of his own priest in South Carolina left Mack traumatized. Mack used the words "wrestled" and "grappled" as he described his struggles with faith and sexuality after the event.

"Let's just say it was a dark angel that I wrestled with for a long time," Mack said.

The passing of years brought Mack the chance to meet the priest who abused him, and inspired Mack to create the play that he said remains a work in progress.

Father Michael Drea said the church welcomed Mack to perform there as part of healing the damage from the clergy abuse crisis.

"I went to see the play when it was over at B.U. at the beginning of the year. I felt that Michael had really captured his own journey very, very well, and his own sense of reconciliation and peace with God and the Church," he said.

Mack debuted the 90-minute play, directed by Daniel Gidron, in January 2012 at the Boston Playwrights' Theatre at Boston University.

"I needed to do it initially as a way to grapple with one of the major events of my life," Mack said.

He also saw a chance for reconciliation on a greater scale, which contributed to his decision to open St. Paul for the performance.

"I also felt that he had a very balanced approach, as he wrote that play and presented it, to show the effects of abuse not only within the Church, but within the wider context of society as well," Father Drea said.

Mack said he saw a need and a reason to allow audiences into his personal story by creating the play, which he wrote and performed.

"This was the first time I have done it in a Catholic church, and done it for as large a Catholic audience. I felt like absolutely people were connecting with what I was talking about because this is a shared experience," he said.

He said he felt the performance gave the audience an opportunity to explore the events unveiled by the media in 2002.

After the performance, director of the Archdiocese of Boston's Office of Pastoral Support and Outreach Barbara Thorp joined the playwright on stage to field questions from the audience.

Thorp said she spoke to Mack about the play after an Advent Mass at St. Paul. She agreed to come and to let people know about the show.

"I was extraordinarily intrigued that someone would find a way of taking the path for their healing to tell their story through this one man play. I was also aware that when people tell their story, by virtue of telling it to someone, it is an enormous act of trust," Thorp said.

"I have never heard of anyone doing something like Michael has done, and so I was delighted that he had invited me," she said.

Questions after the play moved quickly from the personal experience of the creator, to the culpability of Church leadership in the crisis.

Mack said he felt grateful to have Thorp with him on stage.

He also said he thought the chance for the audience to ask questions provided him an important opportunity to reach out and interact directly with the audience.

"The first thought that came to my mind was, 'This topic means a lot of different things to a lot of different people.' I was glad to have somebody to share the QandA with me, to field some questions that I might not have yet the resources to handle," Mack said.

Thorp said the experience Mack shared on the stage should reach audiences, and in particular Catholics, in order for the lessons from the crisis to remain unforgotten, while allowing the faithful to move on.

"He carries us forward with him by being vulnerable to share the very intimate and painful details of his past," Thorp said.

He said he has used the question and answer sessions from previous performances to develop the play further.

"Having created something like this, it is not enough to just say, 'OK, now it's done. Problem solved. Move on,'" said Mack.

"As I talked with people about it, it informed the play. It informed the shape that it took. That is another way that I feel that this is very much a community experience," Mack said.

"For several years I had, more or less, the show through the first three acts. The part that ended on the outrage, that could, 10 years ago, be a perfectly legitimate ending to really reflect the outrage that so many people in the Church and outside of the Church were feeling," he said.

For Mack, a time when a boy had a fearful encounter with a priest gave way to a time when a man set out to confront his abuser after years of struggling with his own sense of identity.

"I have to say that the word 'victim' is one that I have never been entirely comfortable with and I use the word personally kind of in quotes, because it suggests a kind of powerlessness. Certainly as a child I think that it was true. As a child I was a victim. As a man I don't have to be," Mack said.

Parishioners in the audience described their feelings immediately after the show.

"Is there something that we are offering to enable people both to articulate these things, I suppose, and to possibly be able to find some level of peace? Not closure, as Michael says, just a measure of peace," Laura Garcia, 56, a parishioner at St. Paul said, restating her question from the discussion segment.

"Theater offers that kind of communal sense that is healing. In this particular context, I think it can offer people some shared healing," said George Bard, 59, a parishioner at St. Paul.

Mack's next performance of the play will be held at the Paulist Center in Downtown Boston on June 16 at 7:30 p.m. For more information, visit www.michaelmacklive.com.