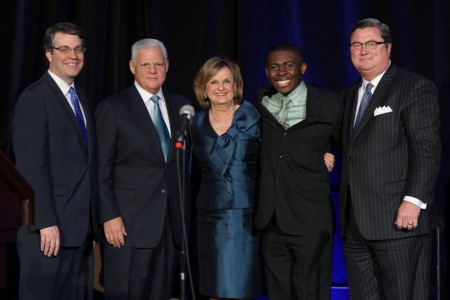 In making the announcement Mr. Reynolds and Mr. Tucci also recognized Fortune Kalala, a senior at Central Catholic High School in Lawrence, who was the evening's student speaker. Fortune, a scholarship recipient and honor roll student, moved to Lawrence when he was 13 from Mozambique where he had lived in a refugee camp with his family. After years of fleeing political unrest and civil war, Fortune began the 7th grade not knowing any English. After two years of hard work, he was accepted to Central Catholic High School and was able to attend because of a scholarship provided by the Inner City Scholarship Fund.

Mary Richardson formerly of WCVB's Chronicle emceed the evening program which began with a rousing performance of songs from the musical "Godspell" by the students of Cardinal Spellman High School in Brockton. Attendees also viewed a video produced by Putnam Investments detailing the importance of Catholic education.

This event, coupled with the Annual Appeal, has raised over $9,000,000 to support Catholic education in the Archdiocese of Boston.

The Catholic Schools Foundation, Inc. (CSF) supports the educational mission of the Church while helping to provide programs and services that insure optimal educational opportunities for all students regardless of race, religion, national origin, or gender attending Roman Catholic primary and secondary schools located in the Archdiocese of Boston.