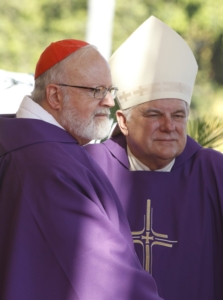 The only American cardinal able to make the journey to Cuba to follow in the footsteps of Pope Benedict XVI during his visit to Cuba March 23-26, Cardinal O'Malley witnessed firsthand the changes in the Catholic Church in that country.

Cardinal O'Malley's history with the Cuban people dates back to his days studying at Capuchin College, in Washington, D.C. It was there he got involved with the Agrupacion Catolica Universitaria (ACU), a Catholic student organization, founded in 1926 in Havana by Father Rey de Castro. The members of the ACU quickly became among his closest friends, and then-Father O'Malley became the Washington-area chaplain of the ACU.

In 1973, when he became director of the Centro Catolico, a Hispanic Catholic center that reached out to impoverished Latinos in the Washington area, he turned to his friends at the ACU for help.

"They were doctors and dentists, and all other types of professionals, and they came in and helped me in any way they could," he recalled.

In the early 1980s, the cardinal travelled to Cuba for the first time in order to help bring more Capuchins to the island.

"There were only two friars left in the country," he explained, "because during the [Communist] Revolution, [Fidel Castro's men] had arrested all the friars except for these two men who hadn't been in the house when the soldiers came."

For over 20 years, the two friars had continued running all the Capuchin parishes in Cuba, but by the early 1980s, both men were elderly and the order wanted to bring some younger friars to Cuba, he continued.

"The first attempts were unsuccessful, and my task was to find out why," the cardinal explained.

What he found was a Church in ruins.

"The persecution of the Church was very, very severe," he said, noting that only the elderly were allowed to attend Mass regularly.

Practicing Catholics often found that their ration cards, the system used by the Cuban government to allow Cubans to purchase necessities such as food and clothing, had "gone missing," another "powerful tool in manipulating the population," Cardinal O'Malley said.

According to Cardinal O'Malley, only about 2 percent of the Cuban population attended Mass regularly in those times.

All that began to change in 1998, when Pope John Paul II arrived in Cuba, he said.

Then-Bishop O'Malley made the journey to Santiago de Cuba and Havana in 1998 and knew the Church had entered a new reality.

"That was a real turning point in the life of the Church in Cuba," said Cardinal O'Malley.

"After the pope's visit, there was greater freedom to practice one's faith," he said, noting that entire families began to attend Mass together "and they weren't persecuted anymore."

Five years later, in 2003, the cardinal was asked to return to Cuba as the Apostolic Visitator to the two seminaries on the island.

"I found that of the 80 or so seminarians, 90 percent of them were converts who attributed their conversion to [Pope] John Paul II's visit to Cuba," he said.

Last week, when he travelled to Cuba, he found the Church in Cuba stronger than ever.

"I found the Church even more flourishing and on the road to recovery than I had hoped," he said, noting that the social services provided by organizations such as Caritas Cubana are helping to rebuild the Cuban people.

He pointed to an event in 2010, where Havana Cardinal Jaime Ortega was involved in the release of 52 political prisoners in Cuba, as an indicator that the Church has earned the respect of the Cuban government as well.

But the situation is far from perfect, he said.

"The government doesn't give the Church much space in order to expand their ministry," Cardinal O'Malley said.

Paraphrasing Pope Benedict XVI's homily in Havana, where the pontiff implored the government to give the Church more freedom, the cardinal said that what the Church is asking for is not "privileges," but the ability to "minister to the people of Cuba."

"I'm presuming the situation [of the Church] will continue to evolve," the cardinal said. "It's not going to remain the way it is."

"I think the Holy Father's presence brought the world's attention to Cuba, which is a good thing because it helps to put pressure on the government to continue to change and to allow greater freedom to the people of Cuba," he said, "which is something we would all like to see."