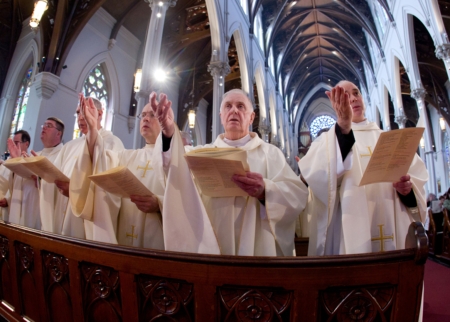 SOUTH END -- The priests of the Archdiocese of Boston kept the tradition of Holy Week on Tuesday as they gathered to celebrate fraternal unity at the annual Chrism Mass.

"The Chrism Mass is very inspiring because it manifests the unity of the priests with the bishop," said Father Jason W. Worthley, parochial vicar of St. Catherine of Genoa Parish and St. Ann Parish in Somerville.

Priests, seminarians, religious and laity from all over the archdiocese joined Cardinal Seán P. O'Malley and his auxiliary bishops on April 3 at the Cathedral of the Holy Cross.

"Sometimes when we are in our ministry we might feel like we are alone going here and going there, but every year we are renewed realizing that we are all on the same team, united with Cardinal Seán and with our Holy Father Pope Benedict. That is very inspiring," Father Worthley said.

Greek Orthodox Metropolitan Methodios of Boston attended the Mass as a guest of the cardinal.

The cardinal said he extended the invitation to continue a tradition the two observe each year.

"Each year he comes to visit our community on the Chrism Mass, and I will go to his cathedral for their Easter, which this year will be one week after ours, and greet his people in the name of the Catholic community to further a sense of solidarity and fraternity with the members of the Greek Orthodox Church," Cardinal O'Malley said.

During Holy Week each year in Catholic dioceses throughout the world, the local bishop holds a Chrism Mass where he blesses the sacred oils used to administer sacraments for the coming liturgical year: the oil of catechumens, the oil of the infirm and the sacred chrism.

Following the Mass, priests in the diocese receive the oils to use throughout the year in baptisms, confirmations and the anointing of the sick.

During the Mass, the bishop also leads the priests in renewing their commitment to priestly service.

The tradition of the Chrism Mass dates back to the early Church and was later made part of the evening Holy Thursday Mass. As part of his 1955 liturgical reforms, Pope Pius XII called for a separate Chrism Mass, apart from the Holy Thursday evening Mass. Though many dioceses celebrate their Chrism Masses during the day on Holy Thursday, Boston celebrates the Mass earlier in Holy Week to allow more priests to attend.

Franciscan Father Joseph Paul Medio said the Chrism Mass provided priests to come together with each other and with guests in Christian unity through the Eucharist.

"In general, the Eucharist is a sacrament of unity. We all have one head, and that is Christ. We are all members of one body," Father Medio said.

Cardinal O'Malley focused his homily on the struggle of priests performing the work of their ministry. He compared priests who experience hardships in their ministry with the Apostle Peter in his struggles to walk as a follower of Christ.

"I wanted to show people that all of us have struggles, but our struggles are not any different from the struggles of the first priests, the apostles. Despite all of their struggles and difficulties they were able to accomplish the Lord's work and fulfill their mission. Now the Lord is counting on us to do the same," the cardinal said of his homily.

After Mass, the archdiocese priests walked across the street to Cathedral High School and extended the spirit of fraternity with a luncheon to recognize two of their brethren.

At the luncheon, priests recognized Father Louis R. Palmieri and Father James F. Rafferty for their work throughout the years advancing the priestly ministry.

Father Rafferty graduated from the seminary in 1963. He served as campus minister at Framingham State University and University of Massachusetts Boston over the course of 12 years, before serving for about six years on the faculty of The Pontifical North American College. He was pastor at St. Malachy Parish in Burlington before becoming the pastor at St. Paul Parish in Hingham

After Cardinal O'Malley presented Father Rafferty with the award recognizing his service, the honoree spoke about Saint John Vianney as an example for his fellow priests.

"I reminisced about visiting Ars, where St. John Vianney was the pastor for his lifetime. He just had that one parish, a very, poor, humble country parish. I saw there some signs that inspired me," Father Rafferty said afterward.

Father Rafferty said that tradition describes St. John Vianney as a saint who pursued further learning in his mission despite his own difficulties.

"He was never formally educated, but he was bright. He had trouble in seminary because he could not understand the Latin texts or read them, but he could read French and he continually educated himself throughout his whole life, which is something we have to do too to stay at it," Father Rafferty said.

Father Palmieri received recognition for his work over the years and is currently serving as dual pastor of Holy Family Parish in Amesbury and Star of the Sea Parish in Salisbury.

After he graduated from Boston College with a double major in philosophy and theology, Father Palmieri taught for a year before he entered St. John's Seminary where he graduated with a master's degree in divinity and was ordained in 1993. He served at St. Bridget's in Abington, St. Joseph's in Holbrook, St. Michael's in Avon, and took on his current work in 2010.

"I am just very grateful to his eminence for this honor. It is a privilege to serve him and to work with the priests of the archdiocese, because they are truly continuing the mission of Christ," Palmieri said.