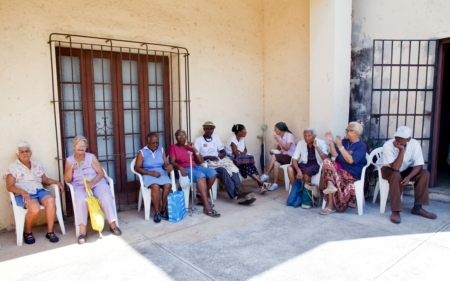 Seniors wait outside the Caritas Cubana meal center at St. Agustin Church. "Sometimes [the people who come here] are a bit desperate because they only eat what they eat here," program director Mercedes Hernandez-Valdez said. Pilot photo/Gregory L. Tracy

HAVANA -- Mercedes Hernandez-Valdez is a woman on a mission -- a mission to feed the aging people in San Agustin, the parish she has worshipped at her entire life.

For the past eight years, Hernandez-Valdez, 68, has been the director of a Caritas Cubana meal center run out of her parish's small basement kitchen. Together with a team of parish volunteers, she makes sure that 100 seniors are given a warm, nutritious meal every day. Those who are ambulatory, roughly 24 of them, eat at the parish refectory; the remainder have their food brought to their homes.

"Sometimes [the people who come here] are a bit desperate because they only eat what they eat here," she said.

And feeding those who come to the meal center can be a challenge. The parish's kitchen facility is ailing. One of the two stoves is unusable; the refrigerator doesn't function; the pots and pans used to cook are pitted and chipped; food costs are on the rise and shortages often occur.

"But still here we are," she said.

Hernandez-Valdez dreams of a time when parish services can expand.

"Our aspiration is that this can be a day center -- where they can stay here all day long," she said. "But that would require us to rebuild our facility," something that there is no money for.

In addition to the meal center, San Agustin also runs a school for continuing studies, which holds classes on topics such as marketing, computers and foreign languages.

Unlike the meal center which only has one paid employee -- the cook -- the classes are taught by area university professors who receive a stipend from Caritas Cubana for teaching the evening classes.

The program has been ongoing for years, despite the fact that, in Cuba, only the government is officially allowed to run institutions such as schools and hospitals.

"We've been here for eight years and have had no problems. It's open, everyone knows it's here, but it hasn't been officially sanctioned by the government," she said, adding that many state-run universities even honor the diplomas given by the school.

The programs at St. Agustin are two of the hundreds of programs funded by Caritas Cubana, a non-governmental social service provider of humanitarian aid. Affiliated with the Catholic Church, and run under the guidance of Havana Archbishop Cardinal Jaime Ortega, Caritas Cubana reaches out to care for the island's neediest citizens.

At the center of it all is Maritza Sanchez, the program's director. Sanchez's job is to coordinate with the parish-run program directors, allocate funds to each of the programs and ensure that the funds go to helping the most vulnerable in society.

It is no small task. With over 7,000 volunteers and 70 full-time employees, Caritas Cubana runs hundreds of programs in all of the 14 provinces in Cuba. The programs vary by parish and include meal centers, homes for children with Down Syndrome, childcare centers, homes for people with AIDS and work force training programs.

Begun in 1993, Caritas Cubana was originally a very small organization. In 1998, after Pope John Paul II's historic visit to Cuba allowed greater freedom to the Catholic Church, Caritas Cubana expanded their services. Today it has a $1.5 million operating budget, which comes almost entirely from international sources, such as Catholic Relief Services and other Catholic social service organizations. However, a significant portion of funds also comes from private donors in the U.S. In 2011, donations from Friends of Caritas Cubana alone made up over 20 percent of the organization's annual budget.