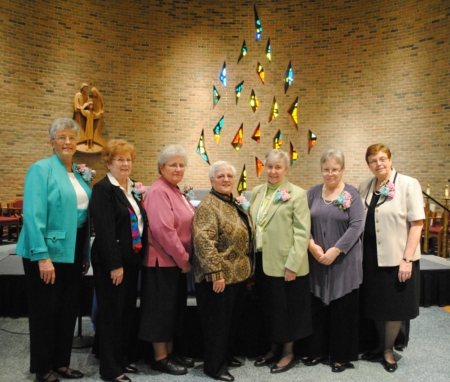 BRIGHTON -- Sisters of St. Joseph of Boston and associates gathered at their Motherhouse in Brighton March 22-25 for the election of the seven-member leadership team who will serve the congregation for the next six years.

The election process began March 23 with a Mass of the Holy Spirit presided by Cardinal Seán P. O'Malley. During his homily Cardinal O'Malley spoke of religious life as a witness to the Church and praised the work of the sisters saying "You have served the Church and this archdiocese in so many ways and are so loved by the people and priests."

In looking ahead to her ministry as president of the congregation, Sister Rosemary said authority is a gift of the Spirit and she committed to lead the congregation with "a contemplative heart which will seek to call forth and empower the rich gifts present in each and every Sister and Associate in our Congregation."

The election weekend was part of a year-long process that also included weekends in September, October, November, February, and mid-March. The theme for the year-long Chapter, ''Dare to Dream,'' centered around prayer, discernment, and discussion about how the mission and spirituality of the congregation is to be lived during the next six years. Through this process the sisters and associates reflected on their life, mission, and ministry as Sisters of Saint Joseph in response to the needs of today's Church and world.

The Sisters of St. Joseph of Boston is a Congregation of more than 370 religious women and over 80 associates who minister in the Greater Boston area and beyond. They trace their roots from LePuy and Lyon, France and St. Louis, Mo. and arrived in Boston in 1873.