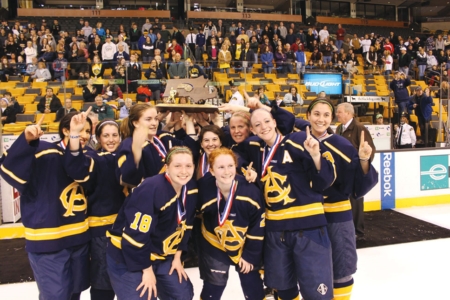 The girls from St. Mary's in Lynn were hoping for anther Division 1 state title, having won the last four, but the girls from Arlington Catholic prevailed with a 3-1 win on Sunday morning, March 18 at the TD Bank Garden. AC led 1-0 after the first. Then came two unassisted goals from freshmen Adriena Rossini and Allyson Cunningham 18 seconds apart in the second and the Cougars were up 3-0. St. Mary's got on the board 9 minutes later with an unassisted goal from sophomore forward Brittany Lanzilli. For the AC Cougars, the state championship is the first since 2007 and comes after a two year hiatus. Congratulations to both teams for a great season ending with 21 wins.

Ten years have gone by since the boys from St. Mary's in Lynn have won a state title in basketball. Playing on the hallowed floor of the pros at TD Bank Garden on Monday afternoon, March 12, the Spartans took on Cathedral from the South End and prevailed with a 70-64 win. Cathedral never led and made a valiant effort to catch up in the fourth period going on a 12-2 run but time ran out for the Crusaders. Congratulation to both teams for a great season. Previously, on March 9, Cathedral captured the Div. 4/south title with a 65-55 win over Westport. Cathedral ends at 17-7. St. Mary's ends at 20-4.

The MC Lancers began the season without Coach Chris Serino to lead them to another Super 8 championship as he did last season, due to a battle with throat cancer. However, with Coach John McLean at the helm, the boys on ice repeated another spectacular season that culminated with a second-in-a-row Super 8 championship at the TD Bank Garden on Sunday evening, March 18. Malden Catholic defeated Boston College High School 3-1 in the exciting game. Down 1-0 after the first period, Brendan Collier tied it in the second and Mike Iovanna and Casey Fitzgerald sealed the victory in the third. Despite the loss, BC High played well and had a great performance from goalie Peter Cronin. The Eagles end at 13-7-5. Malden Catholic ends at 20-1-4.