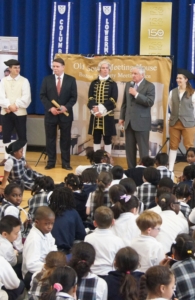 DORCHESTER -- John Hancock Financial presented the Campaign for Catholic Schools with a check for $1 million at Pope John Paul II Catholic Academy in Dorchester, on March 26, and a visit from the founding father with the most popular signature in American history.

The financial gift will be given to the school over the next five years, continuing the company's support of Catholic schools in the Archdiocese of Boston. It will support literacy programs for English and non-language learners and recruitment programs to improve faculty diversity.

President of John Hancock Financial Jim Boyle said his company is bolstered by the high-quality education provided in the local educational system, so supporting Catholic schools is a natural fit.

Boyle pointed to the students of such schools as future leaders.

Dr. Mary Grassa O'Neill, secretary of the Catholic School Office, said the money will go to good use in construction and restoration projects at schools in the archdiocese.

She said John Hancock Financial coordinated with the Campaign for Catholic Schools and made the donation as a commitment on a local level.

"In the City of Boston they chose Dorchester and Mattapan because that is where the largest number of children are, and they have tried to do their work in the city. Two cities, Boston and Brockton, have been the first beneficiaries," she said.

Hancock Financial also took the occasion to celebrate their 150 years in business with a special presentation for the students.

"I think it is huge that they chose to include this," O'Neill said.

Around 200 elementary-school age students gathered in the gymnasium for the announcement of the donation and a presentation from the Freedom Trail Foundation Scholars program's 18th century costumed "John Hancock." Two other players provided the students with interactive re-enactments of the Boston Massacre and the Boston Tea Party.

"This is so interactive and engaging, so I think it is delightful," O'Neill said.

The Bostonian Society loaned a number of artifacts owned by the patriot John Hancock for viewing by the students as part of the celebration.

According to a press release, John Hancock Financial plans to supplement the financial gift with a robust in-school history program. The company is working with the Freedom Trail Foundation to deliver a custom-designed supplemental history and civics curriculum to students.

O'Neill commended the company for having around 30 employees at the event.

"The fact they give their own time is a huge message to our children, to the parents, to the teachers, and the principals. I think it gives them spirit and boosts their hope and their energy for what it is that they are doing. But also it is historical. They are learning about John Hancock, a very important person in the life of the country. The company is named for him. These kids will never forget. They will know all this about The Boston Tea Party and The Boston Massacre," O'Neill said.