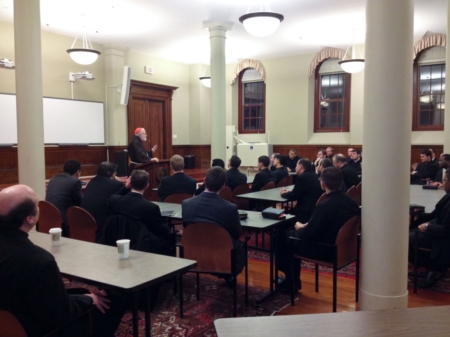 'That evening (3/16) I met with the seminarians at St. John's Seminary for evening prayer, a holy hour and dinner.' Pilot photo/CardinalSeansBlog.org

Last Thursday (3/15) afternoon, I was visited by Christopher Gosselin, who was a youth minister in the archdiocese and is now a campus minister at Salve Regina University in Newport. He brought a group of students to do service projects here in the archdiocese, particularly the homeless and others. He brought them to meet with me at the cathedral and have them talk a little bit about their experience and their faith. We had a nice conversation with them and they gave me a beautiful paperweight with the Salve Regina prayer in Latin. After our meeting, they had a chance to take a tour of the cathedral.

That evening (3/16) I met with the seminarians at St. John's Seminary for evening prayer, a holy hour and dinner. Then, after dinner, I had a time of dialogue with them. I also used the opportunity to speak to them about the HHS regulations and the issue of physician assisted suicide. Then, since it was a Friday night, I led them in the Stations of the Cross.

That evening (3/17), I was invited to give the invocation at the banquet held at the Fairmont Copley Hotel to mark the 275th anniversary of the Charitable Irish Society -- one of the oldest Irish organizations in the United States. It was founded in Colonial Boston in 1737 and remains an active organization promoting immigrants' rights and helping immigrants. During the time of the famine they were very involved in sending aid to Ireland. Most people do not realize that, in the colonial times, many of the people who came from Ireland were actually Presbyterian Scotch-Irish; they were "Orangemen," as we call them. They were the founders of this organization, which was founded by King George and, during colonial times, there were members who were both patriots and loyalists to the crown. After the Revolution, they admitted Catholics. (60 years before the Irish got the vote in Boston they were allowed to join the Irish Charitable Society.) So, they have an interesting history of bringing together people who ordinarily would have been "on the other side of the aisle," so to speak. However, I observed that the Orangemen probably made a mistake in letting the Catholics in because we seem to have taken over!

During the evening, a number of people received the organizations' Lifetime Achievement Award including: Sister Janet Eisner, the president of Emmanuel College; poet and playwright Dick Flavin; the founder of Friends of the Public Garden, Henry Lee; and the former Boston Police commissioner Kathleen O'Toole, who is now Chief Inspector of the Garda Siochana, the Irish national police force. The evening was also an opportunity for several very nice conversations. Richard Culhane, the Deputy Mayor of Drogheda, was there and gave me a book about poet John Boyle O'Reilly, who was the editor of our archdiocesan newspaper, The Pilot.

Meeting of CUA board of directors

Then that evening (3/18) I traveled to Washington to attend the spring meeting of the Board of Directors of Catholic University of America, which is the U.S. bishops' university. In the evening I was asked to address a men's discernment group for those are considering the priesthood. I was happy that there were a couple of Boston lads in the group. We had Vespers and dinner and then I gave a presentation on my own vocation. Afterwards, we had a dialogue on priestly vocation discernment. This was just another encouraging example of the ways Catholic University is really trying to promote its Catholic identity, encouraging both the young men and women to be conscious of their personal vocations and their Catholic faith.