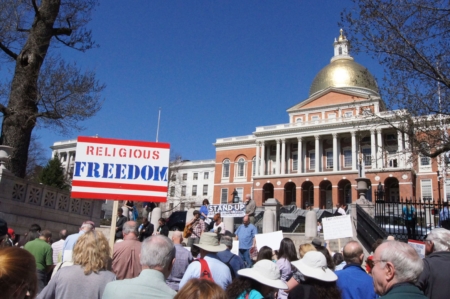 Supporters of conscience protection rally across from the statehouse in Boston against the recent healthcare mandate, March 23. Pilot photo/Christopher S. Pineo

BOSTON -- With little notice, organizers rallied roughly 300 Catholics and supporters across from the Massachusetts State House on Boston's Freedom Trail to protest against a mandate to force Catholic employers to provide employees with sterilization, birth control and abortive pills under the new healthcare law, coinciding with a series of noon rallies throughout the country on March 23.

Previously thought cancelled, the rally came together on short notice when organizers sent out an email reading, "The Rally Is On" the previous day.

"We only began this process yesterday morning at 10:00 a.m. when we heard the rally had been cancelled," said the email, forwarded to The Pilot by Massachusetts Citizens for Life, Inc.

State Representative Jim Lyons, R-Andover, also spoke at the rally, after the email announced a "special guest to be named at event."

"Massachusetts is where our country began. We have an obligation in Massachusetts to stand up for religious freedom, and we have a responsibility to elect people who stand with us. Our goal, folks, is to hold our elected officials accountable," said Lyons.

Speakers focused their remarks on the mandate as part of a larger intrusion by the state into the expression of faith for all people.

Clarivel Marin de Dragas, a mother and a newly naturalized citizen, said her 7-year-old daughter motivated her to stand up publicly, when she said, "That's not right" regarding the mandate.

"At that moment, I knew that the worst thing I could do is doing nothing," she said.

Landry followed her up with his thoughts on what is actually at stake, as opposed to the perception of what is at stake.

"To be very clear, this is not an issue about birth-control; it is an issue of government control and government coercion," Landry said.

Landry said that Catholics support the constitutional definition of religious freedom by opposing an attempt to force them to violate their consciences. He said framing the issue as a debate over contraception obscures the real issue.

"Contraception, we all know is a 'red herring.' It is a diversion. This is clearly about restricting religious freedom," Landry said.

Pastor of Sacred Heart of Jesus Parish in Webster Father Adam Reid closed the event with a blessing in direct calling for help from God.

"Give us not only wisdom, you being the source of all wisdom, but also courage and the fervor to go forth from today and take this message forth that we should have the freedom not only to worship you, but to live out our faith, especially in this time, in this place, in this country," he prayed.

After the speeches concluded, Father Reid told The Pilot that Catholics and other people of faith will lose more than freedom from providing birth-control with under the Obama administration's mandate; they will also lose the ability to perform ministry.

"The door is now swung wide to many other infringements on not only the Catholic Church, but other faith denominations, and faith communities. We have only just begun to see how this path will lead to a real reduction in what we are able to do in private and public spheres as people of faith," Father Reid said.

Ed Shanahan, executive director of MCFL, advised people to go to the www.federalregister.gov where the federal administration has posted a proposal entitled "Certain Preventive Services Under the Affordable Care Act" with a 90-day public comment concerning the mandate.

"I think it is imperative that people learn about this mandate," he said.

"That is the opportunity for the American people to express their concern with each and every aspect of the 'Obamacare Mandate' with which they have a concern. As good Christians, as good followers of any religion for that matter, we should all be overrun with concerns about what this mandate means for religious freedom across the country," Shanahan said.

According to the national website "Stand Up For Religious Freedom," the protesters joined 54,000 across the United States at noon that day to protest the mandate.

Some Catholics at the Boston rally shared their reasons for making a stand for their faith in a public venue.

Christopher Oravetz, 27, of Cambridge attends Mass at St. Francis Chapel in the Prudential Center. He said young people need to stand up on issues like the mandate, to protect their religious freedom publicly.

"For young people, I think it is important that as we grow and enter into our future vocations -- whether it be marriage, a call to religious life, or celibate life -- that we be responsible for taking an active civic role within our communities, within our families, within our state. It is important for us to be educated now," Oravetz said.

U.S. Air Force veteran Frank Nealon, 83, of St. Mary's Parish in Milford and Kathy Riordan, 59, of St. Agatha's Parish in Milton held the banner behind the speakers during the rally.

"We have to stand up for our religion. That is the duty of the lay faithful. The priests and the cardinal cannot do this alone. We have to stand up and exercise our baptismal and confirmational character. So, I am very proud to stand here," Riordan said.