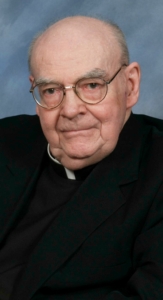 Father Fallon was born in Woburn, one of three children of Martin H. and Helen J. (Mead) Fallon. He grew up in the South End of Woburn, attending St. Charles Elementary School, then graduating from Boston College High School with the Class of 1939. He went on to receive his bachelor's degree at the College of the Holy Cross, graduating in 1943 and then entered St. John's Seminary.

While growing up, his family had a fruit store, Halliday and Fallon, in the Busy Bend section of the city, where he and his brother worked. After heading off to St. John's Seminary, he became less involved, but would pitch in any time he was home.

He was ordained to the priesthood in 1946 by Archbishop Richard Cushing at the Cathedral of the Holy Cross and served in several parishes during his more than 47 years of active ministry.

His first assignment following his ordination was as vicar at Immaculate Conception Church in Stoughton, followed by assignments to St. Rita Church in Lowell and Our Lady Star of the Sea Church in Marblehead.

In November 1953 he was named chaplain of Boston State Hospital in Mattapan. In August 1954, he was named vicar at St. Francis Xavier Church in South Weymouth and then vicar at St. John the Evangelist Church in Wellesley. Then in 1958, he served in the Diocese of San Antonio, Texas on a lend-lease basis for two years.

Returning back to the archdiocese in June 1960, he served in St. Mary Church in Dedham (1960-1965) and St. Agnes Church Arlington (1965-1971). In August 1971 he was named pastor of Sacred Heart in Gloucester by Archbishop Humberto Medeiros. He served there for just over four years before taking assignment back to St. Agnes Church in Arlington and remained there for nearly 9 years before taking his final assignment to St. Mary Church in Ayer in 1984.

On Nov. 15, 1993 Cardinal Bernard Law granted him senior priest/retirement status. He remained in residence at St. Mary's before moving to Carmel Terrace in Framingham in 1995. In 1997, he became a resident at the archdiocese's Regina Cleri residence for retired priests.

Father Fallon was blessed to have thirteen nieces and nephews, who fondly recall visiting him throughout his ministry and looking forward to his wonderful stories about growing up in Woburn or discussing current events. He is also recalled as an extremely bright man, who was a wealth of information on subjects such as saints, popes, churches, Vatican II and many other aspects of the Catholic faith.

He is survived by his brother, William H. Fallon and his wife Paula of Woburn, his nieces and nephews, and many grandnieces and grandnephews.

Father Fallon's Funeral Mass was to be celebrated March 22 at St. Charles Church in Woburn followed by burial in Calvary Cemetery, also in Woburn.