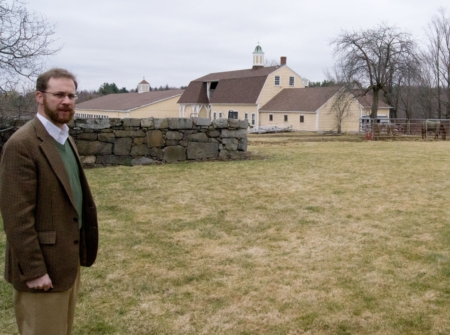 Thomas More College of Liberal Arts president Dr. William Fahey poses near stables and horse pens on the property being developed in Groton as the new home of the college's undergraduate program. Pilot photo/Christopher S. Pineo

GROTON -- High school sophomores looking to attend a Catholic college within the Archdiocese of Boston could have one more option to consider by the time they graduate.

Thomas More College of Liberal Arts began renovating and preparing a plot of land in Groton, after purchasing it last April, to become home and site of the first new Catholic college in the Archdiocese of Boston in almost 50 years.

With the land purchased by the school and the sewerage extension approved by the town last month, the new campus stands ready to become the first new Catholic college in the archdiocese since the Sisters of Mercy established Marian Court College in 1964.

Thomas More College president, Dr. William Fahey said the move could take place as soon as 2014 or perhaps closer to 2019, depending on when the college secures funding for the project. At that time the undergraduate programs will migrate from the college's current Merrimack, N.H. campus.

The current home of the college, a 12-acre site, houses around 80 students as compared to the 35 acre site in Groton.

According to Fahey, the board of trustees at the college approved the plan to expand the student body to 300, which should also increase revenues for the school.

Fahey said the Merrimack campus will then become the home of a graduate studies program for St. Thomas More College of Liberal Arts.

The plot of land on Old Ayer Road, known locally as the J. Geils Farm, takes the name from former owner John Geils, of the J. Geils Band. Some locals also know the farmland as the Bates property.

Fahey gave The Pilot a tour of the grounds and structures as he explained the plans for development of the property to accommodate the larger student body.

"This area here," Fahey said gesturing to an open field, "could hold four or five hundred residential students. When you are standing here looking at it, it does not necessarily look that big."

Fahey told The Pilot the school had narrowed the choices for their new home in recent years, ultimately deciding on Groton.

"One of the reasons we liked Groton is they were serious about their home town. We had to go through all kinds of town-hall-scrutiny on whether we should be able to come in, which quite frankly I really liked, because it meant people here are serious about what the whole of the community is like, not just their little part," Fahey said.

Fahey said he saw that Groton demonstrated a commitment to a sense of community, while he saw the vision of the school reflected in the environment of the town.

"For the sake of the students, outside of the class time, they can just come right down to a town that is a real town -- where they have an example of beautiful historic New England architecture -- and citizens who care about living in Groton," he said.

Surrounded by conservation land, the property allows the college to build the campus to the size needed with assurance that future developments will not encroach on the school.

The land surrounding the property contains wetlands protected by conservation laws, land zoned only for agricultural purposes, residential land across a street, and the historic district of town.

Fahey said this creates a kind of buffer-zone, giving the school autonomy within its location.

"It has the feel of several hundred acres because you do not have to worry about development, or town encroachment, and that is more-or-less permanent," he said.

The farm has horses and pens that the college intends to keep and develop a riding course or extracurricular activity. Fahey said the plan falls under the traditional Catholic model of educating "the intellect, the soul, and the body" of students.

"What we are leaning toward is continuing the operation of the equestrian center, either for our students or just as something that the local community can continue to participate in," Fahey said.

"One of the things that we would like to do in that area is create a little access-point for students, with a little center for their bikes, that they could ride down to the rail station," he said.

Fahey said some of the landscaping will begin this summer, when the groundskeeper will plant two gardens near the site where an above-ground pool was removed.

The main house will remain intact and receive some restorative work.

"At one point, from say the time of the World War I through the 50s, this was considered to be one of the grand estates," he said.

"The intention is to keep it (and) to simply restore it," Fahey said of the main building on the grounds.

Another aspect of the construction plans aims at restoring and preserving a different building in the community.

The school hopes to move the Sacred Heart Church building from its current location at the corner of West Street and Main Street to the new campus.

"The college is hoping it can work with the parish -- the parish has been very helpful so far -- and potential buyers, or just roll this all into our capital campaign, purchase it ourselves, keep it intact until the time is right, and then move it onto the property," he said.

He also pointed out the architectural significance of the church, designed by Henry Vaughan, in the Gothic Revival style.

"The man who designed this was one of the architects for the National Cathedral in Washington, D.C. This was one of his earliest churches," Fahey said.

With the church moved and the college providing a local Mass, the faithful in Groton would have a new place to worship in their community Fahey said.

He said the college would then share the space with local Catholics, by making it available for prayer and celebrating Mass with the college chaplain.

Fahey said the school is eager to participate with Groton in creating the sense of community, and expressed gratitude and respect for the people of the town.

"They really do care about this thing called community, which is talked about a lot, but people do not always take active steps into building and investing in it," he said.