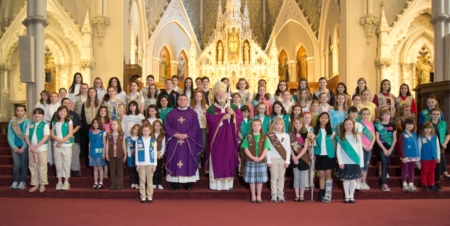 SOUTH END -- In honor of 100 years of tradition nationally, Girl Scouts and their leaders came to the Cathedral of the Holy Cross to celebrate Mass with Cardinal Seán P. O'Malley on March 8.

Troops from around the archdiocese wore uniforms at the Mass. Joined by their parents, scout leaders and the celebrants, the scouts observed their local Catholic heritage at the cathedral.

"It is a wonderful privilege to be here in the cathedral, the seat of this archdiocese, so filled with history, marking their own history of 100 years in the Girl Scout movement," said Medals Councilor of Holy Family Parish in Concord Jane Torpie.

The cardinal spoke about the connection between scouting and the Church in his homily.

"In our life all of us have a very special vocation. The Lord is calling us to service in a special way. Scouting is about service and how we can serve a community, but each of us has a very special calling. We discern that in prayer, trying to see what God is calling us to do as individuals. But, all of us share in a mission that together we have to build a civilization of love to make God's Kingdom more visible and to help people to discover how much God loves them," the cardinal said.

Director for Divine Worship Father Jonathan Gaspar explained how scouting helps connect Catholic girls with their faith in the archdiocese, after the Mass.

"It is a wonderful thing to be able to see young men and women, boys and girls engaging in their faith and seeing how as Catholic Christians they can put their faith into concrete action. The scouts help them to make those types of connections between what they believe and how they act in this world. We are grateful for the leadership of the scouts in the archdiocese and very encouraged by the witness of these young people," Father Gaspar said.

"Our future as a Church will be enriched by their participation," he said.

Scouts participate in their faith by working to receive medals representing understanding of the scout's own religious tradition within a track of medals.

While girls of any religion can pursue the track, the medals honor understanding teachings of the scout's individual religion.

The four core Catholic medals include the "Family of God," "I Live My Faith," "Marian Medal," and "The Spirit Alive."

The "Family of God" plan provides a bilingual activity series that complements the catechetical efforts of the parish and families for girls in the second and third grades, according to the National Catholic Committee for Girl Scouts U.S.A and Camp Fire U.S.A's (NCCGSCF) website.

Through the "I Live My Faith" program, NCCGSCF helps Girl Scouts in grades 4 through 6 appreciate more deeply the place that God and religion occupy in their daily life, according to their website. Activities in the program focus on a scout developing awareness of "her potential as a growing person, friend, family member, citizen, and a participant in the community of faith."

According to the website, the "Marian Medal" enables Catholic girls in grades 7 through 10 to "proclaim the greatness of the Lord." The program presents "Mary as a model of openness and spirituality--a woman of the Church."

Hannah Smith a senior at Trinity Catholic in Newton earned the medal as a cadet.

"The central focus of the medal is on Mary and we go through a whole workbook and a year of doing different projects relating to Mary and her story. But also taking those projects and doing things for the community. When I did it we sponsored a baby shower. We collected lots of baby items, and toiletries, and stuff to then donate to women who needed those things," Smith said.

The "Spirit Alive" program assists Catholic high-school-age girls "in discovering how the Holy Spirit moves in their lives, calling them to greater participation in the Church's ministry."

Amanda Miller a senior at Waltham High School said she is currently working toward receiving the "Spirit Alive" medal.

"It is a really nice thing because I did the first three and this is the last one. Since this is my last year as a Girl Scout it is very important to me," she said.

Once a Catholic girl gets these medals she can also receive the "Pillars of My Faith Medal," commemorating the achievement.

"Their principles and the principles of the Catholic Church are very much in synchronicity," he said.