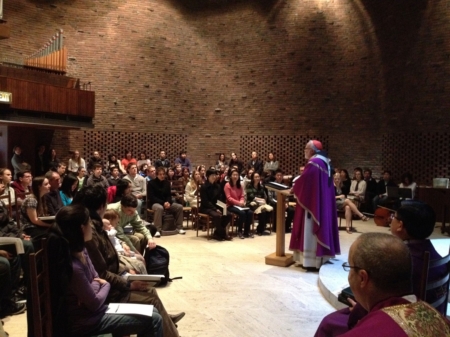 'On Sunday (3/11) I joined the Catholic student community at MIT for mass. It is a wonderful campus ministry and the FOCUS ministers are doing such wonderful work there assisting the campus chaplain, Father Richard Clancy.' Pilot photo/CardinalSeansBlog.org

Last Thursday (3/8), we had the meeting with the Presbyteral Council. It is always edifying to hear the input of the priests of our archdiocese, and we had very good conversations on a number of issues. Also during our gathering we had a presentation by Father Bryan Hehir, our Cabinet Secretary for Social Services, regarding developments with the Department of Health and Human Services contraception mandate and also from our Cabinet Secretary for Faith Formation, Janet Benestad, on the issue of physician assisted suicide. We wanted our priests to be informed about these two very important and pressing issues so that they could, in turn, inform their people.

That evening (3/9), I visited Redemptorist Mater Archdiocesan Missionary Seminary in Brookline. I was very happy to be able to join them for Vespers and dinner and to spend some time with the seminarians. After dinner, we spent the evening together watching a Russian film called "The Island." It tells the story of a man named Anatoly, who was a soldier during World War II who later becomes a Russian Orthodox monk and spends his life seeking God's forgiveness for his actions during the war. It is a very enjoyable and inspiring film, and very appropriate for Lent.

On Saturday (3/10) we went to Tyngsborough for the dedication of the new altar and church of St. Mary Magdalen. Father Ron St. Pierre is the pastor there and oversaw the building of the new church. The original parish church, just a couple of miles away over the town line in Dracut, was built over 50 years ago as a chapel for summer visitors, so this new building provides them with much more room. Those who know the parish, know they have a beautiful parish center with classrooms and meeting rooms in the first floor, which is ground level. But, as Father St. Pierre said, a parishioner very wisely suggested that when they constructed it they build the foundation in such a manner that a church could be placed on top.

Saturday morning I joined the deacons of our archdiocese for Mass and lunch during their annual convocation, which was held here at the Pastoral Center. The deacons have an extraordinary choir and music program, as I always say, good enough that he would want to record it and make a CD. But perhaps the highlight of the Mass was the moment when all the deacons renewed their vows of the diaconate. I used to run a diaconate program myself in Washington and, in every diocese I have been in, I have seen the extraordinary work that deacons do in our parishes. The ministry of the deacon is so important in the archdiocese that we have recently expanded the program so that there is a new class of deacons ordained each year.

Then yesterday, just as we met with superiors of the women's religious communities last week, I also met with the superiors of the men's communities. Once again, Sister Marian Batho did such a wonderful job coordinating and organizing the gathering. I joined them for prayer and lunch, followed by a presentation by Father David Couturier on the very important issue of pastoral planning. The day also gave me a chance to express to them how very grateful we are for their orders' presence here in our archdiocese. Their various spiritualities and charisms enrich us all and are such a valuable contribution to the work of the Church here.