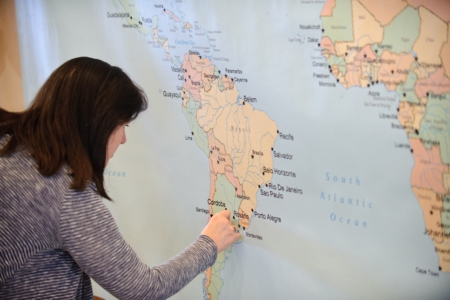 A participant in the Anti-Defamation League of New England's Nation of Immigrants Community Seder place pins on a world map indicating the countries of their cultural roots. Pilot photo/ Courtesy ADL

BOSTON -- Local community and faith leaders came together at UMass Boston March 11, for "The Nation of Immigrants Community Seder" hosted by the Anti-Defamation League of New England.

The event uses the traditional Passover Seder, which commemorates the exodus of the Jewish people from slavery in Egypt, to celebrate the universal desire of all peoples for freedom that have led so many to leave their homelands to build a life in the United States.

The ADL presented the Seder meal as Temple Israel in Boston's Cantor Roy Einhorn and Rabbi Elaine Zecher explained the significance of each tradition of the meal.

The meal began after brief remarks from the co-chairs and Mayor Thomas M. Menino, and entertainment including a lion dance from Boston's Gund Kwok Asian Women Lion and Dragon Dance Troupe and songs from the Boston Children's Chorus.

Some guests read brief summaries of personal immigrant experiences making the adjustment to the experience of life in the U.S.

Consul General Bazak and playwright Anna Smulowitz Schutz spoke after the cardinal, before the dinner concluded.

Throughout the years, the cardinal has attended many Seder meals, and he described his first one in his talk for the guests of the ADL.

"It was an extraordinary event that helped our people to understand our connectedness to the Jewish people. One of the wonderful concepts that I have learned from Jewish heritage is that of 'tikkun olam,' repairing the world. Our world in many ways is so broken, and our coming together here today, people representing so many different traditions, is a way for us to work to repair the world," the cardinal said.

He called the Church "the daughter of the synagogue."

In his talk the cardinal also addressed the importance of people of faith getting along and living in peace based on the idea that in one way or another believers in the God of Abraham await the coming of a savior or messiah.

ADL staff and executives said the purpose of the Seder was to build bridges in local communities, in working to repair the world by helping people protect civil liberties.

"ADL has been around for 100 years. Our mission statement has been the same ever since we started, that is to fight anti-Semitism and to promote civil rights for all people. As part of promoting civil rights for all people we build bridges among many communities. We hope today that the story of the Passover, the exodus of the Jews from Egypt, will resonate with more recent immigrants here. After all, everyone in this room in one way or another is an immigrant," said Mike Sheetz, ADL regional chair.

Derek Shulman, ADL regional director, said the event should encourage people to treat one another with respect and "regard every instance of hate as an attack on all people." He said building these bonds begins with discussion between individuals, conversations which can be stimulated at events like "A Nation of Immigrants Community Seder."

"The Seder is really an ideal place to bring people together and cross divides that may keep people apart, and bring them together instead, because you have to ask questions about all the strange things on the Seder table. Those questions beget answers, and those answers lead to conversations," he said.

The conversations had at such events lead to the building of bridges which can overcome climates of fear related to stereotypes and assumptions about other cultures, according to guests and organizers at the event.

"Instead of pointing fingers toward each other, we should try to listen and understand and feel the pain and share the pain instead of pushing somebody into the corner for no reason," Farooq Mirza, of The Islamic Center of Boston in Wayland, told The Pilot.

"We all are American, we should all work all together," he said.

Mayor Menino spoke about the tradition of Boston as a city of diversity, dealing with these issues every day.

"Boston is a city that has changed over the last 20 years. We are a city of tolerance. We understand our differences," Menino told The Pilot.

"Diversity is the strength of Boston," he said.

In the same way that the traditional Seder has celebrated the exodus of the Jewish people from slavery in Egypt throughout its history, the event at the UMass Campus Center commemorated the struggles of immigrant groups and individuals striving for freedom in the United States.

Speakers at the event drew parallels between the experiences of the exodus with the struggles of immigrants in the local community.

According to organizers, the Seder brought around 350 guests together to share stories of a nation of immigrants on their own exodus-like journeys in the United States.

Anthony Guerriero, assistant director of community relations for the Massachusetts Port Authority, shared a story about the day his parents, immigrants from the Philippines, became naturalized citizens after living in the United States for 30 years.

"I know America is as much theirs as mine --probably more-so, since they had been here long. But I never noticed the lines of distinction between Filipino, American, and Filipino-American in my own family until that day. But, seeing so many others pledge allegiance made me feel that American was enough. It blurred all those lines," he said.

The traditional Seder includes the asking of four questions by young people at the dinner. The fourth question was presented to the guests in multiple languages to reflect the diversity of the American immigrant experience.

"Why is this night different from all other nights?" representatives from various groups asked in languages as varied as Urdu, Korean, and Portuguese.

The theme of diverse traditions and people of Boston coming together in peace to develop relationships, counter hate, and encourage solidarity in a nation built by immigrants became the answer built throughout the night by speakers and organizers at "A Nation of Immigrants Community Seder."

Speaking with The Pilot after the event, the cardinal remarked on the theme from the viewpoint of the Church.

"Something like a Seder meal is an opportunity to bring people together and to underscore some of our common history. Certainly the Seder meal is very important in the history of salvation, for what it means in God's promise of liberation for God's people in Israel, and also for us as Christ used this very symbolic meal to initiate the Eucharist of the new covenant," the cardinal said.