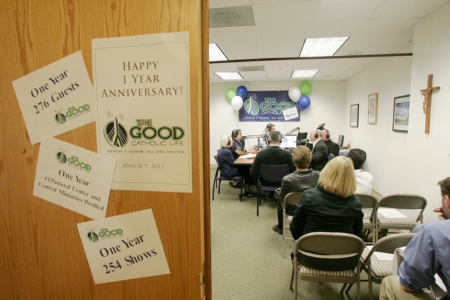 BRAINTREE -- Scot Landry could not have known that his college extra-curricular activity would lead him to be host of "The Good Catholic Life," the Archdiocese of Boston's radio program, which celebrated its one year anniversary on March 9.

As an undergrad at Harvard, the Lowell native looked for an outlet for his athletic side.

"When I got to Harvard, being 5'6" and not that fast, I wasn't going to play any of the sports on an intercollegiate level, although I was very involved in intramurals," he said.

Instead, he focused his passion for sports into broadcasting Harvard basketball and football for a college radio station.

"Those that I had learned (radio) from, who graduated a couple of years prior to me, went on to CBS Sports, and places like that, but they could never get in front of the mic," he said.

After earning his bachelor's degree and attending Harvard Business School, he spent a year as a research fellow. At that point, Landry made a practical decision for his early career.

"I soon came to the conclusion that I'll just go and get a traditional job that helps pay back the loans that I incurred going to a place like that," Landry said.

He said the love for broadcasting stayed with him as he progressed in his career.

In that time, he landed positions as the chief operating officer at Eze Castle Software and Eze Castle Integration, a principal at The Parthenon Consulting Group, brand manager at Procter and Gamble and James River Corporation.

While his work in secular organizations took him away from his passion of working behind the microphone, his work at the Archdiocese of Boston steered him back toward his passion for broadcasting.

Landry came to the archdiocese in 2006 as Secretary for Institutional Advancement and, in 2010, Cardinal Seán P. O'Malley appointed him the Cabinet Secretary for Catholic Media.

Landry said the cardinal advocated for radio as a powerful tool of evangelization, and helped facilitate the establishment of Boston's first full-time Catholic station in November 2010, WQOM 1060AM, The Station of the Cross.

Landry said he remembered particularly walking with the cardinal after a Mass celebrating the launch of WQOM. The cardinal told Landry that it was a "joy" to have local broadcasting for Catholics in Boston.

He said the cardinal told him that, "It's important that we have a local program and that we serve up our faith a little bit with a Boston accent here, to go along with the great national program that we have."

"That became an objective of mine," Landry said.

Landry said he did not envision that he would be hosting a program four months later, but after Jim Wright, the founder of The Station of The Cross, expressed encouragement -- and told him how much work it could be -- Landry decided to host the show himself.

"I spoke with Cardinal Seán, and a few others, and I prayed about it for a while, knowing that it was a deep time commitment to be able to do it five days a week, but I believe so much in the power of radio to evangelize and to teach our faith. It all came together, because Jim (Wright) said, 'Somebody like you, Scot, would be somebody that I would welcome as a host,'" Landry said.

As the launch of the show drew closer, Landry assembled the team he would need to produce a quality, professional show.

Landry's Radio Apostolate came together and gave the show a name. After some brain storming, "The Good Catholic Life" stuck, according to staff.

"The other one we had thought of was 'Catholic Chowdah,' which would have worked around here, but I don't think people in Buffalo would get the joke," said show producer Rick Heil.

One year after Heil found himself waiting for Landry moments before the show's first episode, "The Good Catholic Life" aired its 254th episode. In that year, the show has profiled hundreds of Catholic leaders and ministries, and covered numerous aspects of Church teaching and their practical application.

Throughout that year, Landry and co-hosts Father Chris O'Connor, Father Matt Williams, Susan Abbott, Father Mark O'Connell and Father Chip Hines have presented 276 guests and profiles of 100 Church ministries, including 41 of the 50 at the Archdiocesan Pastoral Center, where "The Good Catholic Life" has its studio.

"I think we could go five years without bringing people back to the show, if we did not need to, just because of all the ministries and people that work in the Archdiocese of Boston," Landry said.

Landry said that during his time as Secretary for Institutional Advancement he was struck by the array of ministries in the archdiocese, and that he plans to continue to use the show to bolster public awareness of the ministries by profiling leaders, initiatives and programs of the Church.

"They are under bushel baskets, and we need to lift the baskets and let the good news of those ministries shine out," he said, referring to the Gospel reading in which Jesus says that no one lights a candle to place it under a basket.

Co-host Father Matt Williams, director of the Office for the New Evangelization of Youth and Young Adults, said he looks forward to doing the show each week.

"St. Paul says that faith comes by hearing, and hearing comes by the Word of God that we preach. I really enjoy being a co-host. I look forward to being with Scot, and whomever we are interviewing on that day, and I most especially look forward to being able to proclaim and preach Jesus on the radio, knowing that faith comes by hearing," Father Williams said.