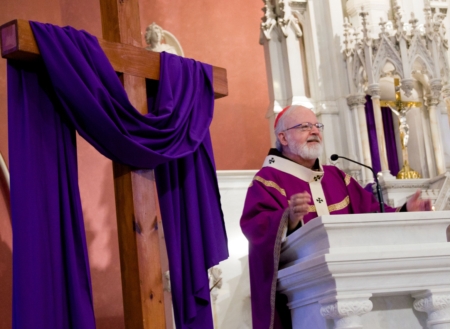 "Each year, we turn to the Catholic faithful to ask for your help to be able to carry out this mission that has been entrusted to us," Cardinal Seán P. O'Malley told parishioners at Holy Family Parish in Amesbury during a March 3 Mass to kick off the 2012 Catholic Appeal. Pilot photo/Christopher S. Pineo

AMESBURY -- Cardinal Seán P. O'Malley kicked off the launch of the 2012 Catholic Appeal, "The Good Samaritan Is You," at Holy Family Parish in Amesbury at an afternoon Saturday Mass on March 3.

The Catholic Appeal launch continued across the Archdiocese of Boston with the cardinal and Vicar General Msgr. Robert P. Deeley celebrating Masses in multiple archdiocesan parishes.

The cardinal continued promoting the launch by celebrating Sunday Mass at Sacred Heart in Middleborough, the next morning.

Vicar General and Moderator of the Curia for the Archdiocese of Boston Msgr. Deeley celebrated Mass during the 2012 Catholic Appeal launch weekend at St. Eulalia Parish in Winchester, at St. Brigid Parish in Lexington and at Sacred Heart in Cambridge.

"We are blessed by the philanthropic support of more than 40,000 donors who generously give of their resources out of a desire to serve Christ's family and a commitment to our Catholic mission. It is remarkable to witness how these Good Samaritans' gifts are transformed into the ministries and programs that so many parishes, schools, families, and other individuals from all walks of life, count on," Msgr. Deeley said, in a statement.

The theme "The Good Samaritan Is You" invites Catholics across the archdiocese to respond to the pastoral, educational, and charitable ministry needs of the Church in the Boston, the cardinal explained in his homily at Holy Family Parish.

"It is during this Lenten season that I come to remind all of the Catholics of the archdiocese that our mission of evangelization, our works of mercy, our service to the poor, the sick, the imprisoned, the formation of priests, deacons, and lay leaders, our outreach in campus ministry, to the youth, our apostolate to immigrants, and the countless services and activities of the faith community depend on your participation, your generosity, and your spirit of sacrifice," the cardinal said.

He stressed the importance of the work of the Church as a group effort reflected through generosity to the appeal.

"Let us continue to work together to carry out the mission joyfully and generously so that the Gospel will be known and loved. Each of us must do our part," he said.

The cardinal explained the work of the Church supported through the appeal as a shared effort, bolstered by Catholics when shared as a community.

"This community helps us to climb the mountain and glimpse Christ's loving presence among us. Here we find the strength, and the motivation, to continue our journey of faith, and to fulfill the mission that Christ has entrusted to us," he said.

In the homily the cardinal made the appeal directly on behalf of the archdiocese, as he asked personally that Catholics support the Church in its continued work in Boston.

"Each year, we turn to the Catholic faithful to ask for your help to be able to carry out this mission that has been entrusted to us. We ask for your prayers, your time, your talent, and your treasure," he said.

He also recognized the many Catholics participating in the work of the Church, from the elderly "prayer warriors" in nursing homes to volunteers throughout the parishes, agencies and missions in the Archdiocese of Boston.

"On my own behalf, and on behalf of the entire community, I thank all of you sincerely," he said.

Father Louis Palmieri, pastor of Holy Family, thanked the cardinal and reminded those in the pews to donate to the appeal.

"Friends, I do wish to remind you that the Catholic Appeal envelopes are located in the pews. The cardinal did not say it, but I will," Father Palmieri told those gathered to laughter.

"The parish is extremely blessed and proud that His Eminence chose Holy Family Parish Amesbury to kick off the 2012 campaign, and truly feel honored that he has chosen us. We're proud to welcome him as our shepherd," Father Palmieri told The Pilot after the Mass.

The faithful who turned out to celebrate Mass with the cardinal also expressed thanks for the inspiration he provides, and for staying to take pictures and shake hands at a reception after Mass.

"To get up close and personal and meet him is absolutely a complete pleasure," Jerry Corcoran, a parishioner and father of four, said.

Tom Leblanc said his excitement for the Mass began when Father Palmieri invited him as a member of the men's Cursillo group at the parish to sing for the cardinal.

"There is no way we would turn that offer down. We jumped all over it. We were very enthusiastic about it," he said.

The Catholic Appeal, the primary philanthropic funding effort for the work of the Church, helps support the vital programs and services offered through the 50 central ministries of the archdiocese. The ministries serve 288 parishes in 144 cities and towns, 122 Catholic elementary and secondary schools, and thousands of Catholics of all ages. Appeal funds come solely from parishioners and donors to support the ministries and ensure that they remain strong.

The appeal's website at www.BostonCatholicAppeal.org provides information about the programs and ministries supported by the Catholic Appeal and ways to give, and develops the theme of the Good Samaritan.

"Just as the traveler from Samaria was moved to help a stranger in need, those who offer their philanthropic support join with the Church in her mission and service to enrich parish life, strengthen family bonds, inspire the next generation to live out their Catholic faith, and help advance the priorities and leadership of the archdiocese on local, national, and global levels," Kathleen Driscoll, secretary for institutional advancement, said in a statement.

Susan Abbot directs the religious education programs in the archdiocese, which benefit from the funds generated through the appeal.

She told The Pilot where she feels the theme of the 2012 appeal fits in relation to the work of the ministry.

"The principle, 'It takes a village to raise a child' can be applied to our work as well. It takes committed, faithful Catholics to pass on and nurture the faith. This is only possible by the generosity of people who are willing, like the Good Samaritan, to help. The Samaritan didn't know the injured man and it probably wasn't convenient or easy, but he knew it was the right thing to do," she said.

The archdiocese reported it raised $13.7 million in the 2011 Catholic Appeal, $1 million more than the previous year.