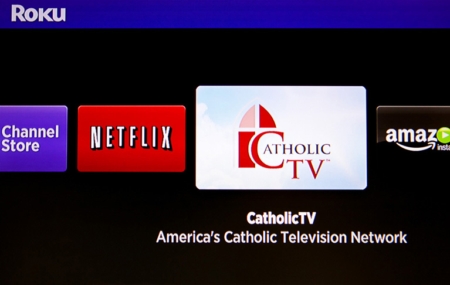 WATERTOWN -- The CatholicTV Network and Roku announced that the two companies have officially launched CatholicTV on the Roku streaming platform. With CatholicTV on Roku, viewers across the nation will be able to instantly access the CatholicTV live video stream and many CatholicTV shows for free beginning Feb. 29.

"For fifty-seven years, The CatholicTV Network has been a staple in millions of homes," said CatholicTV President Father Robert Reed. "Now our world-class network is more accessible than ever."

Roku is the leading streaming platform, delivering news and entertainment to more than two million customers in the U.S. Roku players retail for as little as $49.00.

"The CatholicTV Network continues to use all forms of technology to expand our reach. We are very excited about being added to the Roku channel lineup and look forward to the possibilities this technology presents us to continue to spread the message of CatholicTV," said Jay Fadden, Executive Vice President and General Manager.