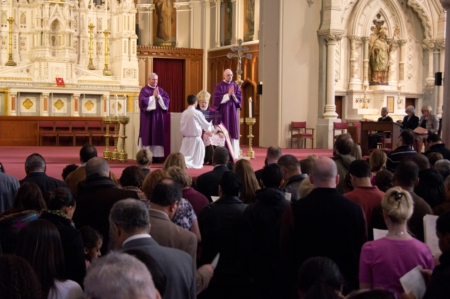 Cardinal Seán P. O'Malley questions catechumens on their preparations for baptism during the Rite of the Election Feb. 26. Pilot photo/Christopher S. Pineo

SOUTH END -- Nearly 500 people preparing to enter the Church this Easter, their families and friends gathered at the Cathedral of the Holy Cross, Feb. 26 for the Rite of Election and Call to Continuing Conversion.

Due to the large number of people, the different regions of the archdiocese were divided into two ceremonies, one at 1:30 p.m. and the other at 4:00 p.m.

"These men and women, and some children, come to the cathedral from all throughout the Archdiocese of Boston and they are received by the Church in the person of our local shepherd, Cardinal Seán O'Malley. The cardinal, speaking on behalf of all Catholics and of the Church universal welcomes them into the Church," director of the Office of Worship Father Jonathan Gaspar told The Pilot after the events.

In his homily Cardinal O'Malley touched upon the universality of the Church, referencing the first reading.

"The fathers of the Church often see Noah's Ark as a metaphor, or a sign, of the Church. We are tossed on rough seas. Some passengers are seasick, some of the crew have mutinied, some have fallen overboard, and yet we are one billion Catholics in all sizes, shapes and colors, and speaking every language imaginable," he said.

"Although it is sometimes a rough ride the Lord has promised that he will always be with us," he continued.

He also celebrated the presence of the newly initiated catechumens and candidates.

"New Catholics who join us on this pilgrimage bring so many spiritual gifts with them that enrich our community. In the history of Catholicism, it has often been the so-called 'converts,' or the new Catholics, that bring new energy and passion to the mission of our Church," Cardinal O'Malley said.

Beginning the Rite of Election, the cardinal asked the godparents if the catechumens had faithfully listened to the word of God proclaimed by the Church, responded to the word by walking in God's presence, and shared the company of their Christian brothers and sisters while joining them in prayer. The cardinal then asked the catechumens if they wished to enter the life of the Church through the sacraments of baptism, confirmation and Eucharist.

As those in attendance began singing "Amazing Grace," the catechumens entered their names into the Book of the Elect.

"I now declare you to be members of the elect, to be initiated into the sacred mysteries at the next Easter Vigil," the cardinal told them.

In the Call to Continuing Conversion the cardinal's questions this time addressed the candidates' baptisms and service to others.

As the godparents had stood behind the catechumens placing a hand on the shoulder of each, sponsors did the same for the candidates, and responded, "They have."

Speaking to The Pilot after the ceremonies, Father Gaspar explained the details of the celebrations of the two rites, in relation to the Catholic season of Lent that began on Ash Wednesday.

"Conversion is at the heart of the Gospel. Christ in the scripture on the first Sunday of Lent says, 'Repent and believe.' That is what we heard when we had the ashes imposed on our foreheads," he said.

Father Gaspar said the ceremonies take place in the season of Lent, because the Church throughout history saw Lent as a time of purification and enlightenment. He said this provided a favorable time for the early Church to initiate new believers.

"That began with this ancient process of receiving catechumens into the Church. Lent was the retreat, a pre-Easter retreat that was intended to prepare men and women who were preparing for baptism to rid themselves of sin and to come to discover in a very deep and intimate way the love of Christ and his mercy," he continued.

He said the rite Sunday brought catechumens in the process of the Rite of Christian Initiation of Adults closer to their common goal of receiving the sacraments at Easter to become Catholic.

"They are already elect members of the Church, even though they haven't been baptized. They gain a new status in the Church. The cardinal, the local bishop, is a reminder that for us as Catholics, it's not just about belonging to a local parish, although that is very important. For many people their entrance into the Church is because of the outreach of local clergy and local Catholics. At this moment in their preparation they see with their own eyes and experience in the liturgy that they belong to a Universal Church," he said.

"The bishop and the rite itself reminds all the fully initiated who are there present that it is our responsibility to support them with our prayers and by our example," he said.

"For us as Catholics it is a day of great joy, we anticipate it all year round, and to see new faces, to see new people being added to the family of God in the Church brings us tremendous joy," Father Gaspar said.