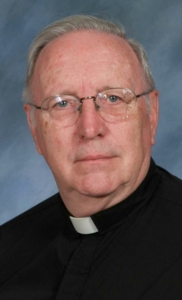 Father Edward M. O'Flaherty, SJ, director of the archdiocese's Office for Ecumenical and Interreligious Affairs and former Jesuit provincial and college president, died Feb. 21 at the Campion Center in Weston.

Born in Roslindale in 1934, he was one of four children. He attended Boston College High School where he was recognized as a bright student and, upon graduation, entered the Society of Jesus at Shadowbrook, in West Stockbridge, in 1952.

When fire destroyed the novitiate in 1956 during his humanities studies, he went briefly to the New York province House of Studies in Plattsburgh, N.Y. He did philosophy studies at Eegenhoven in Belgium from 1956 to 1959, and then spent two years teaching Latin, history, and French at Cheverus High School in Portland, Maine, and a year doing graduate studies in anthropology at the University of Pennsylvania. After theology studies at Weston College, he was ordained a priest there in 1965. He returned to the University of Pennsylvania in 1967 where he received a doctorate in anthropology, then joined the Sociology Department of Boston College in 1973.

After only three years of teaching he was asked to become rector of the community at the Jesuit School of Theology in Berkeley, Calif. ? the first of three jobs leading important Jesuit institutions through dramatic changes in unsettled times. After his stint as rector he was provincial of the New England province from 1979 to 1985 and, after a sabbatical in Paris, president of Weston Jesuit School of Theology in Cambridge, from 1986 to 1992.

When he stepped down as president it was to move in an entirely new direction. For years he had been a member of the Ministers Club, a Boston institution since the 19th century, where clergy from different faiths came together for fellowship and ecumenical conversation, and he had also long been involved in regular work on weekends in the parishes of the archdiocese. These two interests converged when the archdiocese asked him in 1992 to become director of the Office of Ecumenical and Interreligious Affairs and to head the Office of Pastoral Support of Priests, working especially with recently ordained clergy. He moved back to St. Mary's Hall at Boston College, which became his home for the rest of his life. There, he also took on the responsibilities of assistant director and community treasurer. His kindness, wit, erudition, and love for the Society of Jesus and the Church enlivened any conversation he was part of, even during the months of decline after the discovery of the brain tumor that led to his death.

His funeral Mass was held Feb. 24 at St. Ignatius Church in Chestnut Hill followed by burial at the Campion Center Cemetery in Weston. Father O'Flaherty is survived by two sisters, Eileen Bero of Westwood and Jean Crossen of Naples, Fla., as well as many nieces and nephews and grandnieces and grandnephews.