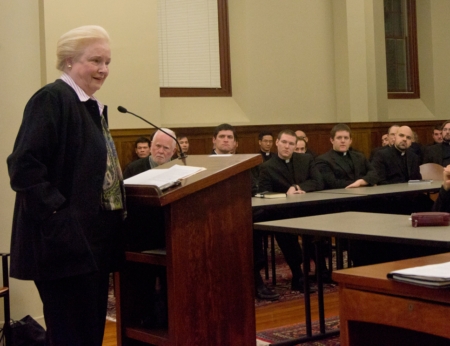 BRIGHTON -- In her presentation "Politics as a Vocation? Reflections from the lives of Cicero and Edmund Burke," Learned Hand Professor of Law at Harvard Law School and former U.S. Ambassador to the Vatican Mary Anne Glendon addressed an audience of priests and seminarians on the subject of pursuing public office as a vocation, Feb. 23 at St. John's Seminary in Brighton.

Describing the purpose of her talk and slide show, Glendon said she was always "struck by how forcefully Pope John Paul II urged the laity to be involved in politics to the extent they are able."

"Anticipating practically every excuse most of us would think of, he said that 'Charges of careerism, idolatry of power, egoism, and corruption, as well as the common opinion that participating in politics is an absolute moral danger, do not in the least justify either skepticism or an absence on the part of Christians in public life,'" Glendon told The Pilot.

"I think he was reminding us, based on his own personal experiences in Eastern Europe, that the work of politics -- despite all its frustrations, disappointments, and grubbiness-- is what determines whether other human activities like philosophy, art, literature, science, and commerce, will flourish or wither," she added.

Glendon takes on the subject of the calling of virtuous people to public service in her book "The Forum and the Tower: How Scholars and Politicians Have Imagined the World, from Plato to Eleanor Roosevelt," the topic of her presentation.

Before moving into the historical subject matter, she spoke as a contemporary in the admissions process at Harvard and Boston College who saw students apply to college and law school intent on serving in public office.

She said many of her best and brightest students change their minds within three years, as they become disillusioned with the current state of politics and question the viability of not compromising their ethics, family life or religious beliefs.

She told the priests and seminarians that in researching her book she found that "some of the greatest political figures and political actors in history have actually struggled with the very same questions, in the very same terms."

With that thought, Glendon launched into considering the similar misgivings of a historically prolific Roman philosopher and statesman.

"Take for example the idea that politics is inherently corrupt and corrupting. That really has been around for a long time. When a young man named Marcus Tullius Cicero told his friends that he was thinking of plodding into politics, they tried very hard to talk him out of it," Glendon said.

She said his friends called the Roman forum "a bunch of schemers and bribe-takers" as they tried to persuade Cicero not to undertake a life of politics.

"Cicero couldn't argue with them. All of that was true, but many people would say the same thing about certain political locations in our society today," she said.

But Glendon said Cicero would not yield the responsibility of public office before the corrupt.

She said in the area of political compromise Cicero -- and later Edmund Burke -- struggled with the prospect of compromising principles in the face of difficult decisions, in effect "going along to get along."

One of Cicero's compromises led to the execution of five Roman citizens for conspiracy without trial. Glendon said that before this, Cicero had defended the principle of no execution without trial.

Later Mark Antony ordered Cicero killed without trial, but the influence of a principled man in a corrupt society lived on, according to Glendon.

"He never was able to imagine how far his legacy would travel, and how many lives it would touch, and what forms it would take," she said.

She said the writings of Cicero went on to influence St. Augustine.

Quoting St. Augustine, she said, "This book indeed changed my whole way of feeling. It changed my prayers, Lord, to be towards you yourself. It gave me different plans and desires. Suddenly all vain aspirations lost their value; and I was left with an unbelievable fire in my heart, desiring the deathless qualities of wisdom. I began to rise up to return to you."

She went on to describe the tribulations of Edmund Burke as his political rivals chastised him, insisting that despite his Anglican faith he was educated by Jesuits.

"Cartoonists never failed to portray him with a Roman Collar, and just in case anyone forgot that he was Irish, they always showed him with a potato in one hand and a whiskey bottle in the other," she said.

Describing the pitfalls in clashes between politics and the virtues of ethical individuals in meetings of theory versus reality throughout Western history, Glendon took her audience through to such recent figures as Vaclav Havel -- the first president of the Czech Republic, who passed away in 2011, ironically in the same weekend as the North Korean dictator Kim Jong Il.

Glendon displayed a black and white photo of Havel in her final slide with a quote from Havel, who served multiple terms in prison for defying the Soviets.

"I feel a responsibility to work toward the things I consider good and right. I don't know whether I'll be able to change certain things for the better, or not at all. Both outcomes are possible. There is only one thing I will not concede: that it might be meaningless to strive in a good cause," Havel wrote in his 1992 book "Summer Meditations."

In similar sentiment, the priests and seminarians asked Glendon about current issues from politics of the present decade.

"What Dr. Glendon has been committed to, what she has been writing about, and what she has dedicated her life to is the dignity of the human person, the culture of life. At the very beginning of my time as a deacon, preparing to be a priest, I am being faced with the same things that she has spent her life defending, working for, and proposing," said Brother Michael Sheehan, FPO, who asked a question about defending Catholic values at the pulpit.

"She is one of my heroes. That is why I came, because she is in the front lines. In fact I was surprised she wasn't all black and blues, because she is right there at these difficult moments, no matter where it is, fighting the battle in China and Egypt, putting out the very best of the Catholic perspective," Father John Mulloy, temporarily assigned to three parishes in the archdiocese, said.